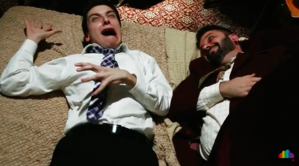 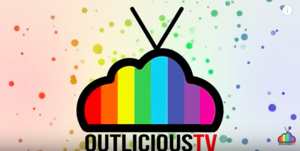 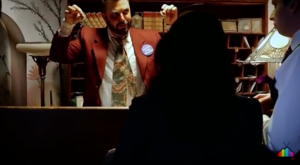 In the ninth episode of the Outlicious TV’s “Flying High with Charlie,” flight attendants Charlie (Brandon Salerno) and Wendy (Iliana Inocencio) endure a comically creepy night during their stay at Bates Motel.

“Flying High with Charlie” is a comedic gay web series that documents the tumultuous dating life of gay flight attendant Charlie. It also works to challenge clichés surrounding the sexuality and profession, such as sleeping with different guys in different cities nightly.

Directed by Brian Pelletier, “Haunted” begins with Charlie and Wendy checking into a horror-themed hotel for their lay over, where they are greeted by the hotel’s manager, Benny (Timothy Dunn). To coincide with his establishment’s theme, Benny tells his guests a scary story about the 13th floor, which they happen to be staying on. Charlie and Wendy laugh it off, eager to get to their rooms.

Ready for a night on the prowl on dating apps Tinder and Grindr, Charlie and Wendy are equally annoyed when Benny repeatedly knocks on both of their doors, consistently reiterating “Service is my Specialty.” While the two were making jokes earlier on as to who will sleep with him, the exhausted flight attendants simply want to get on with their nights.

But the incessant knocking continues, and Charlie and Wendy open their doors to a horrific scene: In the hallway, zombie-like creatures are sitting in chairs positioned to mock an airplane. As Wendy tries to make her way to Charlie, she is attacked by the zombie passengers who badger her with stereotypical airplane complaints.

Charlie saves the day when he throws complimentary snacks at the pestering passengers, who hungrily tear through their free treats. Charlie is then trapped in his own nightmare, when Wendy comes onto him. He wakes up to yet another horror: ending up in bed with Benny. Charlie is released from this final terror when he wakes up and realizes that it is the next morning, and that he had simply slept through the night.

Unlike the rest of the “Flying High with Charlie” series, “Haunted” has an added horror component to its comedic genre, making the episode different from a lot of the actors’ previous work. “I approached it like any other role, by fully commiting to the circumstances that the character was in, [and] combin[ing it] with [an] understanding [of] the tone of the series as a whole,” explained Brandon Salerno, who also happens to be an Eastchester native.

The two-minute episode has the expected tongue-in-cheek humor that usually characterizes the series, with many “laugh out loud” moments. The delicate balance between sexual jokes and cliché horror elements makes “Haunted” a perfect clip for your Halloween amusement.

To see what else is in store for Charlie, check out the the “Flying High with Charlie” channel here.