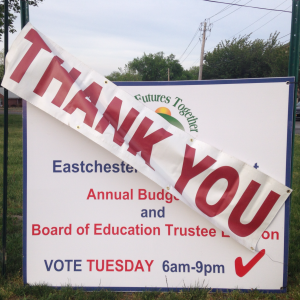 At nine o’clock last night, the Eastchester School Board of Education was able to breathe a sigh of relief as the annual school budget was passed with a 70% approval rating. While the budget season was much quieter this year than in the past, the Board made great strides towards engaging parents and other community members in the budget process. Keeping the locals’ financial concerns in mind, President Willa B. Brody Hughes shares, “we were very sensitive to the community and deliberate in our decision-making about keeping the budget below the tax cap.”

Now that the budget has been passed, the Board anticipates many new innovations and changes to be implemented in the Eastchester school system that will guarantee even greater success both inside and outside the classroom. The adopted 2015-2016 budget will allow for the hiring of new staff members, the expansion of STEM initiatives K-12, and even the investment in new technologies and facilities.

There is no doubt in anyone’s mind that the Eastchester school system is one of the very best in Westchester County and furthermore, New York State. Our students continue to thrive in their academic pursuits with high ranking state assessment scores, college acceptance rates, and impressive AP scores. The music program is also rapidly expanding, while the sports teams engage hundreds of student athletes. With the new implementations lined up for the coming academic year, students will have more resources than ever before available to them as they strive for excellence in their fields of expertise.

Mrs. Brody Hughes would like to thank the parents, parent leaders, and residents of Eastchester who made the passing of this year’s school budget vote possible. Though the budget passed by a considerable amount, on behalf of the Eastchester Board of Education, Mrs. Brody Hughes would like to remind everyone that every “YES” vote counts. Many believe that there is only one vote per household, but every eligible voter has the ability to make a difference in the issues that matter most in our community.