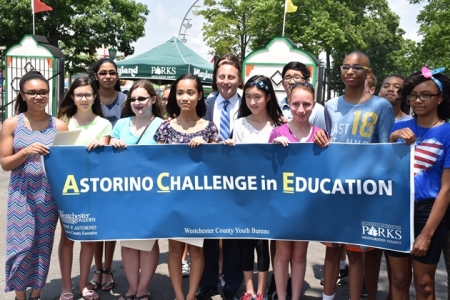 Challenge in Education, or "ACE," offered a free season pass to Playland to students who signed up at the beginning of the school year and achieved one of the following two benchmarks during the 2014-2015 school year:

This was the county's third year issuing the ACE challenge. This year saw more than 900 Westchester students sign up for the challenge, nearly double the number of students who signed up in the first two years combined. There are already more than 100 confirmed winners of the challenge with dozens more coming each day as report cards are sent in by challenge participants.

Astorino was proud of the growth of his ACE challenge.

"We started it as a little extra incentive and motivation for the young people in Westchester as they begin the school year. Work hard, study hard and make all your classes and then get a little deserved reward at the end of the school year," said Astorino. "Each year, participation in the challenge has grown substantially and that's reflective of the commitment of the students, their families and their teachers."

The free season pass to Playland is good from the date of issue until the end of the season and includes free admission to the park and unlimited rides. The passes are made available through the Westchester County Youth Bureau.