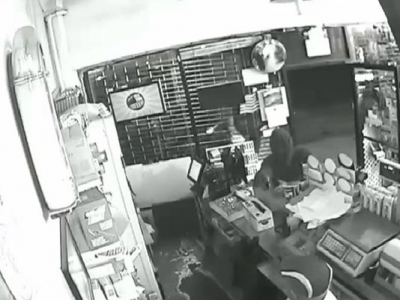 Ned P. Rauch, This email address is being protected from spambots. You need JavaScript enabled to view it. :21 a.m. EDT August 8, 2014

The robberies occurred early Tuesday morning. Both videos show masked robbers with guns. The robberies took place minutes apart. Police say they are related. In one video, three masked people wearing hooded sweatshirts burst into a convenience store, knocked down an employee, aimed their pistols at the clerk and emptied the register of cash.

Police said the first robbery occurred about 5:10 a.m. at the Irish Mini Mart at 821 McLean Ave. As the three suspects charge into the store, one, wearing a white mask, walks behind the counter and shovels stacks of cash from the register into a black bag. A second thief leans over the counter, grabbing money with his left hand and holding a gun with his right.

The second robbery occurred just 15 minutes later. Police said it was about 5:25 a.m. that three masked suspects entered the Dunkin' Donuts at 680 Central Park Ave. The video shows them run into the empty store, climb over the counter and, 30 seconds later, leave with cash from the register.

If you don't see the videos, they can be viewed at these links.

Police ask anyone with information about the robberies to call the Yonkers Detective Division at 914-377-7724. All calls will remain confidential.