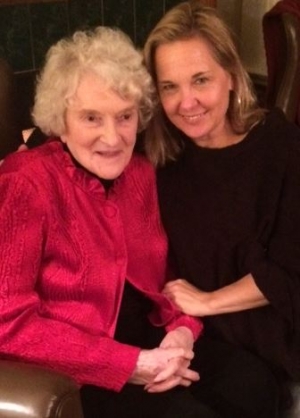 (Editors note: A few years ago, I became a Friendly Visitor for the Ridgefield Visiting Nurses Association (RVNA). The RVNA paired me with an elderly member of the community who wished to have weekly visits from a volunteer resident. Sparks ignited immediately, and a beautiful friendship was born. On Veterans Day, I salute my friend Evelyn Wisner, a U.S. Navy Flight Nurse who risked her life to save wounded soldiers during WWII. Yesterday, November 10, marked Evelyn's 94th birthday.)

In 2012, Evelyn A. Wisner was named a "local hero" by the American Red Cross and presented the Military Award by Ridgefield First Selectman, Rudy Marconi and Lucian Terranova, a board member of American Red Cross. The Red Cross defined a hero as "seemingly ordinary folks all came face to face with danger and chose to put the needs of others before their own- even if it meant risking their life to do so."

As a Navy flight nurse in World War II, Evelyn Wisner was as close to the front lines as women were allowed to get. Two rows of campaign ribbons and two gold combat stars on her dress uniform jacket attest to that.

Evelyn was on of 12 nurses who helped evacuate wounded U.S. soldiers from Iwo Jima. The battle for this strategically important island lasted over a month, cost the lives of 6, 821 Marines and is considered one of the most savage of the Pacific theater..

The Navy used C-47 cargo planes for the evacuation. "We would take off at midnight from Guam and get to Iwo at dawn," Evelyn recalls. "We could hear the shelling from our ships offshore, hear gunfire. That was pretty scary."

They were, at times, "within eyeball range of the enemy." The wounded were lined up on stretchers on the beach. Nurses evaluated which ones might survive the six-hour flight in the bare-bones, unpressurized cargo plane to the hospital on Guam. The others were sent to a hospital ship offshore.

On one of Evelyn's flights, a soldier's wound began to hemorrhage. She asked the pilot to bring the unpressurized plane down to 3,000 feet- a risk, but it saved the young man's life. "I never lost a patient on those flights," she says with pride.

Evelyn enlisted in the Navy after her three brothers went into the service. "I felt I should take care of my brothers. Or somebody else's brothers," she says.

After an interview with Evelyn aired in a CBS documentary on Iwo Jima survivors, a Ridgefield middle school teacher invited her to talk to her students. She continued to visit area schools for several years.

Evelyn's definition of a hero is "someone who does their duty to the best of their ability."