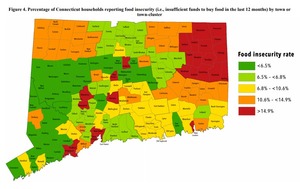 East Windsor was ranked number 117 for the percent of residents reported as Food Insecure (higher rank = fewer residents food insecure) out of 170 towns in Connecticut listed on the report.  The report found that East Windsor had a 7% rate of Food Insecurity, and a 23% rate of Obesity.