What's Acid Reflux & Heartburn Have to Do With Esophageal Cancer 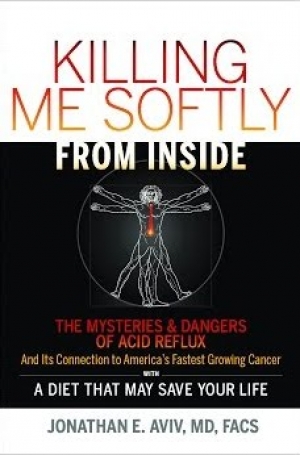 Did you know that esophageal cancer is the fastest growing cancer in America and Europe? The National Cancer Institute estimates that there are 18,170 new cases of this form of cancer in the U.S., with 15,540 deaths from the disease so far in 2014. What’s perhaps even more shocking than the rapid growth of esophageal cancer is its link to a rather common health problem—acid reflux. Yet the remedy may be as simple as changing what you eat.

The esophagus is a muscular tube in the chest, which carries food from the throat to the stomach. The lower esophageal sphincter (LES) is a set of muscles located where the esophagus meets the stomach. The stomach contains acid, which is used to break down food for digestion. When working properly, the LES closes, keeping acid and the contents of the stomach safely in the stomach. In acid reflux, the muscular protection of the LES is compromised.

“So if there is a malfunction down there, acid in stomach comes up, up into the esophagus, or it can keep going up into the throat, into the lungs, into the sinuses, into the ears and to the teeth, causing enamel damage,” Dr. Jonathan E. Aviv, MD, FACS, a surgeon and world-renowned physician of the ears, nose and throat (ENT), said in a recent interview. “So you really want that muscle to work.”

Earlier this year, Aviv published the book, Killing Me Softly From Inside, which is about the connection between esophageal cancer and acid reflux, as well as between acid reflux and common complaints of the throat, such as chronic cough and hoarseness.

WebMD estimates that more than 60 million people experience the symptoms of acid reflux. Yet that number may be a considerable underestimation. When most people think of acid reflux, they think of the chest pain of heartburn, where stomach acid comes back up into the esophagus. But you can also have acid reflux with much more subtle symptoms.

“One of the more dangerous things we see is that people don’t have heartburn—all they have is la lump in throat, throat clearing, hoarseness or chronic cough,” Aviv said.

He explained that when most people experience chronic cough or hoarseness, they assume it’s from post-nasal drip—that the cause is allergies or some sinus problem. After six months or longer of these symptoms, when antihistamines and other allergy medicines aren’t helping them to get better, that’s when patients grow concerned.

“The idea that the stomach is connected to the throat is foreign,” said Aviv. People find it difficult grasp that an organ by the belly button can have anything to do with one by the jaw.

“One of the reasons esophageal cancer from too much acid has been out of control since mid-70s is that the traditional symptoms we think of, like heartburn, don’t happen in these folks. So no one knows to look at the esophagus,” he said.

What happened in the mid-70s to lead to this problem? According to Aviv, the Food and Drug Administration enacted a law called Title XXI. This law said that any substance in a can or bottle must be acidified to prevent bacterial overgrowth and food poisoning.

“It was a great idea,” Aviv said. Yet he pointed out that baby banana food out of a glass jar is 100 times more acidic than a whole banana. “Acid insinuations in our life starts at infancy.”

“I know [HFCS] been vilified, but there’s some science here. Science is as follows: in manufacturing, sulfuric acid is often used, which is acidic,” Aviv explained. “Chemicals used in the food processing also have the physiologic effect of loosening that muscle that protects the esophagus from the stomach.”

Aviv draws a direct link between what we eat and food industry and government changes. “Now this was inadvertent. No one tried to do this,” he said. Yet a combination of legislative intervention and food industry changes has led us to this situation where the silent symptoms of acid reflux—symptoms other than heartburn—are being undetected and esophageal cancer is rising.

“Sure enough, we have a cancer that is very fast-growing. Some GIs, gastroenterologists, believe that within 10 years, if we don’t do something, esophageal will exceed colon cancer as the second most common cancer killer in the United States,” Avid said.

He suggests that if these chronic throat symptoms don’t go away after 8 weeks, people should see a doctor and ask to have their esophagus looked at. Aviv developed a procedure for looking at the esophagus without general anesthesia. With a little numbing medicine in the nose, a camera “about the sixe of a piece of spaghetti” is placed via the nose to look at the throat and esophagus.

“It’s not a very long and involved test. It’s much safer, as you’re not undergoing sedations,” he said. “And you can tell instantly if you have a potentially pre-cancerous lesion, which is called Barrett’s esophagus. That is the stomach lining creeping up into the esophagus, caused by inflammation.”

While it’s rare for patients with Barrett’s to develop esophageal cancer, Aviv says people with Barrett’s are at an increased risk for developing the cancer. “But it’s so slow growing, you can follow it,” he said. “And as soon as it changes into something more dangerous, you can actually remove it or get rid of it very, very easily.”

While the rapid increase of esophageal cancer is worrying, Aviv is reassured by the opportunity to intervene. “We can capture this in the pre-cancerous stage and stop it. So it’s unusual that we have this opportunity,” he said.

While a head-and-neck cancer surgeon familiar with advanced surgical techniques, Aviv does not want people’s health to even get to that point. The solution, he says, is food as medicine, which regular readers of this site know is just what this health coach ordered.

Learn more about the role of food in acid reflux in part II of this article coming tomorrow.

This article was originally published on http://themindbodyshift.wordpress.com. Renée Canada is founder of The Mind-Body Shift and is a holistic health coach and certified sport yoga instructor in Broad Brook/East Windsor. She is available for workshops, classes and one-on-one or small group sessions. Contact her at  This email address is being protected from spambots. You need JavaScript enabled to view it.  or 860-468-9588.