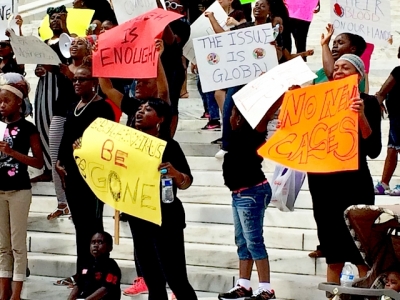 Activists from the Yale Global Health and AIDS Coalition (YGHAC) staged a demonstration Friday, Oct. 17, outside of the Yale School of Public Health in New Haven. Joining governments across the world and other aid groups, YGHAC called upon the people and government of the United States to not neglect the lives of the people of West Africa. As media crews descended on New Haven to cover a possible Ebola case, the student activists demanded a greater U.S. commitment to acute health needs in Guinea, Liberia, and Sierra Leone.

In a rally at 9 a.m., YGHAC members held posters reading “4 cases in the US, 9000 in West Africa,” “Obama: Strengthen Health in Africa Now” and “African lives matter just as much as American lives do.”

“New Haven has a functioning health system that has the capacity to contain Ebola and provide this Yale student with the highest standard of care,” said Teresa Logue, a Yale senior and a YGHAC member. “The fact that this not the case in West Africa is unacceptable. It reflects pervasive, long-standing inequalities in access to basic health services, which the world can no longer continue to ignore,” Logue said.

Emily Briskin, another Yale College senior and YGHAC’s current president, added that “while just one possible case has generated so much press here, the epidemic in Guinea, Liberia, and Sierra Leone is escalating rapidly. Without greater investment in Africa’s health systems now and in the long term, we cannot stop this epidemic or prevent future outbreaks.”

“Guinea, Liberia and Sierra Leone do not currently have the health care personnel, supplies and systems to stop Ebola,” noted Samantha Greissman, a student of Epidemiology of Microbial Disease at the Yale School of Public Health, “and we cannot neglect the lives of the people of West Africa.”

Earlier this week, the World Health Organization called the West Africa-centered outbreak “the most severe acute health emergency in modern times.” WHO has reported at least 8,997 cases of Ebola worldwide and 4493 deaths so far.

“We know how to prevent the spread of Ebola effectively - we’ve done it before.” said Vivek Vishwanath, a Yale junior and YGHAC member. “We are so grateful to the medical and public health professionals who have risked their lives to combat the epidemic. We must build on these efforts.”

YGHAC members called upon Congress to approve the President’s request for all necessary resources to fight Ebola in West Africa, and upon the nation to not neglect the situation in West Africa just because there are now cases on U.S. soil.

YGHAC is a chapter of the national Student Global AIDS Campaign and a registered student organization at Yale University.