Details
Published on Thursday, 28 September 2017 11:54
Written by Homes for the Brave 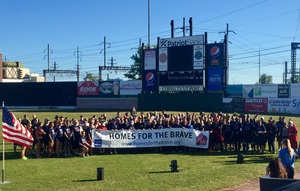 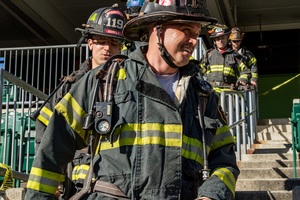 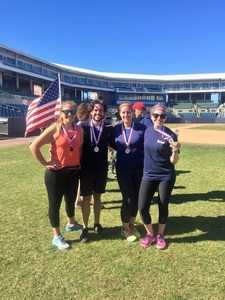 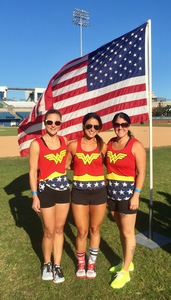 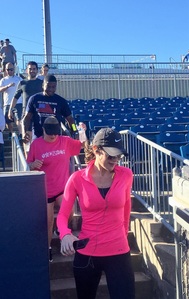 Bridgeport, CT - On Saturday, September 23, Homes For The Brave hosted its 3rd Annual Step Up For The Brave Stadium Stair Climb Challenge. Held at the Ballpark at Harbor Yard, the event attracted nearly 200 Veterans, fitness enthusiasts and generous supporters who laced up their sneakers and climbed stadium stairs to raise almost $37,000 to date for the nonprofit organization.

“This event took a big step forward. We’re delighted with the turnout, the effort, the spirit and the support of the nearly 200 participants,” said Vince Santilli, CEO and Executive Director of Homes for the Brave. “We look forward to carrying on this tradition which enables us to serve our clients who are primarily Veterans.”

The morning began with the National Anthem sung by ‘Sarge,’ a US Army Veteran and HFTB alumnus who is now living independently. Chaz from 99.1 WPLR’s Chaz and AJ morning show was the event’s emcee. “One trip to Homes for the Brave made me a supporter,” said Chaz. “What they do for Veterans is spectacular. It’s an honor to be a part of this event and see the community come together to help Veterans in need.”

Current Homes for the Brave residents attended the event, testifying to the organization’s impact. “When I got home I went down the wrong path,” said one resident who served in a submarine fleet in Washington state. “HFTB is great, they got me training, take me on job interviews, they helped me get my health in order and they’re helping me secure housing. They gave me the tools to come back.”

Collective Soul Frontman and Lead Vocalist Ed Roland was present to sign autographs and take photos with fans. “It’s all about giving back to the military, that’s the ultimate goal. Giving back to them for giving us our freedom,” said Roland.

Lt. Colonel Sean Connolly, Commissioner of the Connecticut Department of Veterans' Affairs, participated as a climber. “Homes for the Brave is a huge partner. They’re all about service and excellence and providing services for the men and women who served,” he said.

If you would like learn more or donate to Homes for the Brave, which is located at 655 Park Avenue in Bridgeport, visit www.HomesForTheBrave.org or call 203-338-0669.

About ABRI/Homes for the Brave:

Applied Behavioral Rehabilitation Institute (ABRI), doing business as Homes for the Brave, is a 501(c)(3) not-for-profit organization dedicated to providing safe housing, vocational training, and life skills coaching to homeless individuals, most of whom are Veterans. Since opening in 2002, ABRI has served over 1,100 homeless men and women through its three major programs: Homes for the Brave, Waldorf Permanent Supportive Housing, and Female Soldiers: Forgotten Heroes, Connecticut’s only transitional living facility for homeless female Veterans and their children.