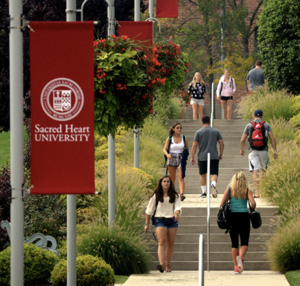 FAIRFIELD, Conn.—Sacred Heart University recently participated in its ninth annual “Walk a Mile in Her Shoes” and hosted the online event for the Center for Family Justice in Bridgeport. With the walk, SHU continues its commitment to raising awareness and funding for victims of domestic violence and sexual abuse. This was the second year that the pandemic forced an alternative to the customary walk-a-thon.

The CFJ, based in Bridgeport, is marking its 125th year in 2021. It offers no-cost, confidential and bilingual services to women and children from Bridgeport, Easton, Fairfield, Monroe, Stratford and Trumbull who have been abused or assaulted.

“Although we could not walk today, we are here together to support the center and to make our voices known and heard,” said Sacred Heart University President John Petillo. “Today’s event, although virtual, does not mean there’s any less commitment or determination to support this important cause.”

Proceeds from “Walk a Mile in Her Shoes” benefit the CFJ’s Camp Hope America of Bridgeport program, founded in 2017. It has served more than 170 children who have been affected by trauma due to domestic and sexual violence, said Greenwood.

MacNamara is also chair of Sacred Heart’s annual White Ribbon Campaign, a global movement of men and boys working to end violence against women and girls. According to statistics he provided:

“Those statistics are not simply ‘statistics,’” said MacNamara. “Those are people, and those are individuals.”

Although the event took place virtually, members of SHU’s Iota Tau chapter of Delta Tau Delta fraternity did walk in person on campus. The fraternity’s local philanthropy is raising awareness of sexual assault and domestic violence, so members work closely with the CFJ each year, sponsoring multiple events to raise awareness, including their annual White Ribbon Campaign.

“The White Ribbon Campaign is important because sexual assault and domestic violence often go unheard across most college campuses in America,” said Jordan Banks, Delta Tau Delta’s director of communications. “It hurts to hear stories of women at campuses being assaulted and the schools turning a blind eye to the situation. So here at Sacred Heart, with the population being majority female, we feel it is important to make their voices heard and present, and to create a safe atmosphere on campus that stands out and helps build up other campuses around the world.”

MacNamara is hopeful that the annual walk will resume as an in-person event next year, in time for its 10th anniversary. “If victims are reluctant to come forward, it’s because they don’t feel that they’re supported, and we’re here to change that,” he said.