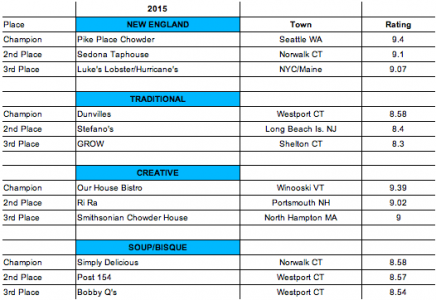 Event Chairman Jim Keenan is speculating that Chowdafest 2015, held Sunday, Oct. 11th at Westport's Sherwood Island "was a record breaker but we won't have all the figures in until later this week." At the same time, he noted that all the attendee ballots have been scanned, the voting has been tabulated by BlumShapiro Accountants and the restaurant/chef winners have been announced.

(See the attached graphic here with the results)