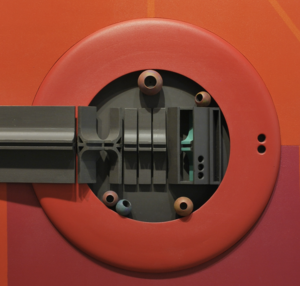 The public is invited to a reception for “Shape Form Pattern” the artwork of Jane Davila, Carlos Davila, and Peggy Weis in the Bruce S.Kershner Gallery on October 14 at 4:30 - 6:30 pm. The artists will talk about their work at 5:15. The show runs from October 7 to December 3 in the Fairfield Library at 1080 Old Post Road and can be viewed during library hours. See www.fairfieldpubliclibrary.org or call 203-256-3155.
Fairfield mixed media artist, Peggy Weis, attended High School of Music and Art in NYC and graduated from Carnegie Mellon University with a minor in Art. She had careers as art consultant for local artists, graphic artist, corporate and residential space planner and designer. Since 1998, she has focused on creating art.
Peggy’s work has been in many private and corporate collections and featured at venues throughout the Northeast. She served on the curatorial committee of the Bruce Kershner Gallery and the Center for Contemporary Printmaking in Norwalk, is a member of the Cultural Alliance of Fairfield County, Women’s Caucus for the Arts, and the Westport Arts Center.
Peggy works in a variety of materials, techniques, processes, and subjects. She says she is “drawn to events that reflect the depth, intensity, and resilience of the human condition” and her life experiences. This series, “Dressmaker's Delight”, is based on drawings of sewing patterns and accessories her mother used when she was in dressmaking school in the early 1930’s.
Jane Davila is a Bridgeport fiber and mixed-media artist. She teaches quilting and surface design workshops across the US and in South Korea, Canada, and Australia. She has appeared numerous times on Quilting Arts TV, writes about art quilting, surface design, and mixed media for national magazines, and is the co-author of Art Quilt Workbook, Art Quilts at Playas and Surface Design Essentials. She wrote a column for Quilting Arts magazine. Jane has lead two mentorship groups of nearly sixty artists for the past eleven years to help artists promote their careers. Both Jane and Carlos have a studio at the NEST Arts Factory in Bridgeport, where Jane is also the managing director.
Jane was a printmaker, then switched to fiber, mixed media, and art quilting. She now incorporates many printmaking techniques with themes of birds, fish, and insects. They reflect her fascination with the impact of nature and man on the environment. Her prints can be found in many private and corporate collections around the world. She says, “Like Mother Earth, beetles appear indomitable and invincible, able to withstand assault and attack, but in reality both are fragile and require care and nurturing to survive and flourish...Perhaps if we humans looked at ‘home’ as this much larger, boundless space around us and did not define it by the artificial barriers we construct, we might be better stewards of our planet.”

Carlos Davila is originally from Peru where he received his MFA. He spent several years exhibiting in and traveling around Europe. After a solo show at the Miami Museum of Art, he moved to New York City and attended Pratt Graphic Center and a Printmaking workshop. His paintings and sculptures  have been shown throughout the United States, Latin America, and Europe. He is a member of Silvermine Guild, Westport Art Collective, Allied American Artists, and International Sculpture Center.

Carlos says, “I have always been fascinated by ancient cultures, beginning with those in my native Peru and spreading to others the world over. The scientific accomplishments and inventions, the mathematical discoveries, the architecture and art, and the cuneiform and hieroglyphic writing of many disparate ancient cultures have been an ideal jumping-off point for my sculptures and paintings...I am equally fascinated by space travel and exploration, and the science of the stars and universe. There are planes, lines, and forms in my work that suggest space craft, satellite trajectories, or computer circuitry. There is a machine-like quality to their appearance along with a timelessness.”