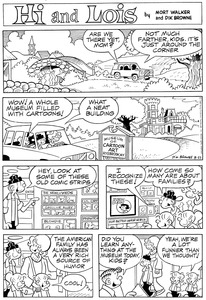 Greenwich, CT - Opening on January 26, 2019 at the Bruce Museum in Greenwich, Masterpieces from the Museum of Cartoon Art will showcase more than 100 original works celebrating the history of this unique art form in America. Among the many items on display will be an early editorial cartoon by Thomas Nast, a spectacular Prince Valiant Sunday page by Hal Foster, and a witty New Yorker gag by Peter Arno, as well as classic Peanuts, Doonesbury, and Calvin and Hobbes comic strips.

Treasures from this rich and varied repository represent all of the cartoon genres, including comic strips, newspaper panels, comic books, editorial cartoons, magazine cartoons, caricature, illustration and animation. The artwork is on loan from The Ohio State University Billy Ireland Cartoon Library & Museum.

The centerpiece of the exhibition will be a recreation of the Museum of Cartoon Art’s Hall of Fame. Thirty-two artists were elected to this prestigious group between 1975 and 1997 including Walt Disney, Milton Caniff, Chuck Jones, Rube Goldberg, Al Capp, and Herblock.  Each honoree is represented by a superlative example of their work and a handsome brass plaque.

The first institution dedicated to the collection, preservation, and exhibition of cartoon art, the Museum of Cartoon Art was opened in Greenwich in August 1974.  Founded by cartoonist and longtime Greenwich resident Mort Walker, it moved to Port Chester/Rye Brook, NY, in 1977, reopened in Boca Raton, FL, in 1996, and donated its collection to the Billy Ireland Cartoon Library & Museum in 2008.

Brian Walker, a former director of the Museum of Cartoon Art, who has been responsible for more than 70 cartoon exhibitions, is serving as guest curator. “I am very excited to display this collection in my hometown of Greenwich,” says Brian. “I’m sure many residents fondly remember the days when the museum was a local attraction. The exhibit is a tribute to my father’s dedicated efforts to establish an institution where the public could view cartoon art on a regular basis. His dream is now being continued by the Billy Ireland Cartoon Library & Museum.”

Masterpieces from the Museum of Cartoon Art promises to provide an entertaining and educational experience for visitors of all ages and, for those who remember the institution during its time in the area, a nostalgic rediscovery of what the museum had to offer. The exhibition will also feature displays documenting the formative years of the Museum of Cartoon Art, the European roots of cartoons and comics, and a video presentation of classic animation.

Special programming will include a lecture at the Bruce on February 18, Breaking Into the Boys Club: A Whirlwind History of Women and Cartooning, by Jenny Robb, Curator and Associate Professor at the Billy Ireland, and a panel tribute to the Golden Age of Cartooning in Connecticut with Cullen Murphy, Chance Browne, Brian, Greg, and Neal Walker on March 7. For more information about the exhibition and related programs, please visit brucemuseum.org or call 203-869-0376.

The Bruce Museum is grateful for support of this exhibition from The Charles M. and Deborah G. Royce Exhibition Fund, the Connecticut Office of the Arts, and a Committee of Honor co-chaired by Millicent S. Armstrong, York Baker, and Anne Hall Elser. The Honorary Chair is Roz Chast, staff cartoonist for The New Yorker magazine, whose work was the subject of a 2014 exhibition at the Bruce.

The attached press release provides additional details about the exhibition. Also attached are high-res images of three cartoons featured in the exhibition, as well as an illustration of Ward’s Castle, the Museum of Cartoon Art’s former home on the New York/Connecticut border. The caption/credit information for the images is as follows: