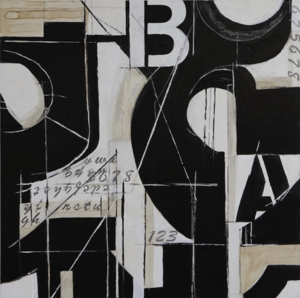 Fairfield, CT - The next show in Kershner Gallery in the Fairfield Public Library is “Art & Text”. This show is in coordination with 13 Fairfield County libraries featuring the same theme. The public is invited to the reception for the artwork of Brian Walker, Chris Perry, Jonathan Talbot, Toby Michaels, Phyllis Clamage, Karen Vogel, and Robert Korn on Friday, October 25 from 6:00 to 8:00 pm.  The artists will talk about their work at 6:45 pm. The show can be seen from October 19 to December 1 during library hours.

For questions, email  This email address is being protected from spambots. You need JavaScript enabled to view it.  or call 203-246-9065. Fairfield Public Library, 1080 Old Post Road in Fairfield. The website is  https://fairfieldpubliclibrary.org/our-community/bruce-s-kershner-gallery/
Brian Walker is a founder and former director of the Museum of Cartoon Art, and is part of the creative team that produces the comic strips, Beetle Bailey and Hi and Lois. He has written, edited or contributed to forty-five books on cartoon art, taught a course in cartoon history at the School of Visual Arts, and served as curator for seventy-five cartoon exhibitions at the Barnum Museum in Bridgeport, at the Belgian Center for Comic Art in Brussels and at the Hammer Museum and the Museum of Contemporary Art in Los Angeles.  He was Editor-in-Chief of Collectors’ Showcasemagazine and is the founder and chairman of the Connecticut Chapter of the National Cartoonists Society.
Chris Perry is a book artist residing in Ridgefield whose work is in the Special Collections of several university libraries and the Yale Gallery of Art in New Haven. He shows his work in venues all over the country. Before becoming a full-time artist, he worked at the Guggenheim Museum and later pursued a career in architectural woodworking.  The focus of his work is always water, in all its forms and effects on other things, both man-made and natural.

Jonathan Talbot has a studio in Warwick, NY. He works in oils, watercolors, etchings, collages, and multi-dimensional collage-constructions. His artwork has been shown at The National Academy and the Museum of Modern Art in New York and in other art venues in U.S. and Europe, including  exhibitions sponsored by the State Department and the Smithsonian Institution.  In 2001, Jonathan was awarded the Medici Medal for Career Achievement by the Florence Biennial.

Karen Vogel is a printmaker, painter and landscape designer who lives in Darien and maintains a studio in Norwalk, CT. Her monotypes and paintings employ images from typography, architecture and organic forms in a multidisciplinary layering of techniques. Her images agitate with a sense of sound and movement, order and chaos, juxtaposing diverse shifts and uncertain references. She studied printmaking at The Center for Contemporary Printmaking in Norwalk, painting and drawing at the Art Students League in  NYC, and at the Corcoran College of Art. She is a Guild Member at Silvermine Art Gallery in New Canaan, CT

Toby Michaels is an award-winning full time artist. She taught art in area schools, then received a Master’s degree in Art Therapy and Counseling. She initiated an Art Therapy program in Norwalk Hospital where she practiced for 17 years, and later at Silver Hill Hospital in New Canaan. Her art is in the Westport Schools permanent art collection. In this exhibit, she pays homage to the abstract expressionists who have inspired her by embedding their names in her artworks..

Phyllis Peckar Clamage lives and works in Stratford. Her work includes collages, handmade books,  journals and monoprints made on various handmade paper.  She has taught papermaking and journal making at numerous schools in the northeast.  Her work has been shown in Connecticut at Silvermine Guild, Art/Place Gallery,  and the Aldrich Museum; and in New York at  the Botanical Gardens, and the Contemporary Craft Museum..  Her works are in many private and corporate collections, including Champion International, Aetna Insurance, Credit Suisse, and I. B. M.

Robert Korn grew up in Pittsburgh where he graduated from Carnegie Mellon as a design major. After graduation, he lived in Paris for six years. He studied briefly at the Sorbonne and designed books for a prestigious French publishing house, as well as writing and illustrating a cartoon book about an American’s outlook on French life.  When he then settled in NYC, he enjoyed a free lance career and created book covers for every publishing house in the city. He also designed many company logos and brochures, and has often been included in the international design annual published in Switzerland.