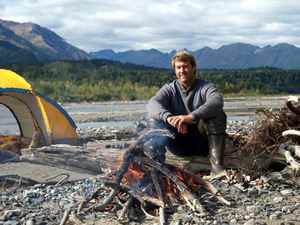 Fairfield, CT - Richard Wiese, president of the legendary Explorer’s Club, will take you on a trip to the unknown reaches of the seven continents in his lecture, “Kick the Bucket List: An Explorer’s Notebook,” as part of the Quick Center’s Open VISIONS Forum (OVF) Espresso Series.

On Tuesday, February 25th at 7:30 p.m., Richard Wiese, who hosts the PBS television series Born to Explore, will share an interactive lecture –designed to open horizons and provoke wanderlust – at Fairfield University’s Regina A. Quick Center for the Arts.

Often referred to as a “modern-day Indiana Jones,” Wiese has lived one adventure after another, ever since climbing Mt. Kilimanjaro when he was only 11 years old. During his OVF Espresso talk, he’ll reveal the insights he gained on his travels across all seven continents, including: two expeditions to Antarctica, cross-country skiing to the North Pole, and participating in the largest medical expedition ever conducted on Mount Everest.

Believing that “your life is not a bucket list but rather a series of short stories of which you are the author,” Wiese brings a seasoned traveler’s curiosity and an appetite for discovery to his role hosting PBS’s Born to Explore with Richard Wiese.

In the show, Wiese seeks to raise awareness about wildlife, land degradation, and human challenges.  He is dedicated to working with local communities around the world. “I think Born to Explore has been very good in giving voice to little-known cultures,” Wiese said.

In 2002, he was the youngest man to become president of the Explorers Club, an American-based international multidisciplinary professional society with the goal of promoting scientific exploration and field study. Members of the Explorers Club have included Sir Edmund Hillary and Tenzing Norga – the first people to reach the summit of Mt. Everest in 1953, as well as astronauts Neil Armstrong and Buzz Aldrin.

Wiese is also the host of the public television series Weekends with Yankee, and the author of the guidebook Born to Explore: How to Be a Backyard Adventurer. His curiosity, warmth, and humor are an example of how travel – whether it be near or far – can transform us all.

This Open VISIONS Forum Espresso is generously sponsored by Cohen and Wolf P.C. Attorneys at Law and Moffly Media. Tickets to see Richard Wiese are $20| $15 for Quick Members. For more information or to reserve your seat, visit www.quickcenter.com or call the Box Office at 203-254-4010, or toll free at 1-877-ARTS-396.