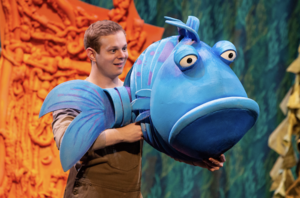 Westport, CT - Westport Country Playhouse’s Family Festivities Series will present the new musical adventure “The Pout-Pout Fish”, based on The New York Times bestselling series by Deborah Diesen, with illustrations by Dan Hanna, on Sunday, March 15, at 1 and 4 p.m. Produced by TheaterWorksUSA, performances are approximately one-hour in length, and appropriate for ages 3 and up.  Tickets are $20 each.

The new musical features whimsical puppets and live performers in a sweeping oceanic adventure. When Mr. Fish sets out on a quest to find Miss Clam’s missing pearl, he discovers there is more to him than his permanently plastered pout.

The production is co-conceived, directed, and designed by the acclaimed puppeteers of AchesonWalsh Studios, whose work was featured in Broadway's “The King and I,” “On the Town,” and “Radio City's New York Spectacular.”

TheaterWorksUSA, the producing company, has led the Theater for Young and Family Audiences movement in New York City and across North America for over half a century. Since 1962, the 501(c)3 not-for-profit has captured the imaginations of 100 million new and veteran theatergoers with an award-winning repertoire of over 130 original plays and musicals. In addition to touring 11 family productions around the country, TheaterWorksUSA’s season highlights include the Broadway production of “The Lightning Thief: The Percy Jackson Musical,” and the world premieres of two New York Times Critic’s Picks, “Dog Man: The Musical” and “The Pout-Pout Fish.”

In conjunction with the Family Festivities Series, the Playhouse will once again host a book collection for Read to Grow, Inc., a statewide nonprofit organization that provides free children's books to families with limited access and to community resources that serve them.  At each Family Festivities performance, bins will be located in the Playhouse lobby for donations of gently used and new children’s books which will be given to families and programs in the greater Fairfield County area through Read to Grow.

All artists, titles, and dates subject to change.