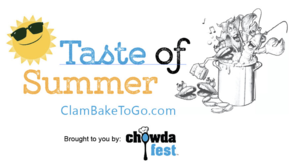 Westport, CT – The inaugural “Taste of Summer” effort, presented Sunday, June 21 by Chowdafest, was "almost as brilliant as the weather," according to organizer Jim Keenan. Hundreds of avid Chowdafest fans participated in the curbside clambake held at The Westport Hub, 50 Charles Street, Westport. People traveled from all over to pick up this novel treat, reported Keenan.

"People were terrific following the pandemic guideline for safety, staying in their cars, having their tickets available through their windows, wearing masks and making two lines for their pick up, making things quick and easy," said Keenan. "I was truly impressed on not only how good people were in following instructions but how excited they were to be part of everything, too. Our goal was to bring a little sunshine into everyone's summer this year, but they ended up bringing a little sunshine into ours by how excited they were about the 'clambake to go,'" he added.

To make the clambake more special, Polar Beverages gave out complimentary cans of summertime flavored seltzers; and Cabot's Creamery provided butter for the lobster, clams, mussels, potatoes and corn on the cob. Sam Adams made quite an impression providing a novel 2-pack of beer per meal to both steam the clambake and toast your Dad on Father's Day.

Special thanks goes to sponsors Aitoro's Appliance and Knot Norms of Norwalk which provided lobster bibs, lobster tools and wet naps. Copp's Island Oysters also participated by keeping everything cold for this effort, while the Friends of Sherwood Island volunteered and wished everyone a happy Father's Day during pick-up.