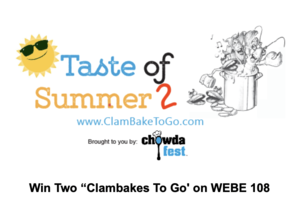 Westport, CT – Local radio station WEBE 108FM, a sponsor of the “Taste of Summer – a Clambake to Go” effort by Chowdafest, will offer listeners of the WEBE Wake Up Show with Storm N Norman the chance to play the "Five Question Quiz" at 7am to win a Clambake to Go for two worth $82. The promotion begins July 13. Two meals will be given away.

“We're thrilled to have WEBE 108 as part of the Chowdafest family,” said Jim Keenan, CEO of Chowdafest. “They've been part of our success for the past 10 plus years. It makes sense to have our “Taste of Summer” effort with the station known for their “108 Days of Summer”.

Every “clambake to go” comes in a pot that the customer keeps and easily cooks from. Each meal includes a 1.5 lb lobster, clams, mussels, sausage, potatoes and corn on the cob. They're convenient and simple to cook as you just add water, beer or wine to the pot, then steam it between 20 and 40 minutes depending on how many meals you have.

Aside from the promotion, these clambakes can only be ordered online at www.ClambakeToGo.com through Thursday July 23rd or while supplies last. Chowdafest introduced its “curbside clambake” last month, for Father's Day, to much acclaim.

To emphasize the “taste of summer”, this effort features a complimentary two-pack of summer ale from Sam Adams and The Blind Rhino restaurant with each meal. It gets even sweeter with complimentary butter from Cabot Creamery to enjoy with your lobster, clams, mussels, potatoes and corn on the cob. Customers will also enjoy a summertime flavored seltzer compliments of Polar Beverages.

“These sponsors and their efforts just exude what summer really tastes like,” noted Keenan. Of course, all meals still receive lobster bibs, wet naps and a “Shuckaneer” lobster tool..

For additional information about this “Taste of Summer 2” effort by Chowdafest please visit  www.ClamBakeToGo.com or visit www.Chowdafest.org. The Taste of Summer brought to you by Chowdafest and is sponsored by Cabot Creamery, CCO Habitats, Copp's Island Oysters, Polar Beverages, Sam Adams, The Blind Rhino, The Westport Hub and WEBE 108 FM.