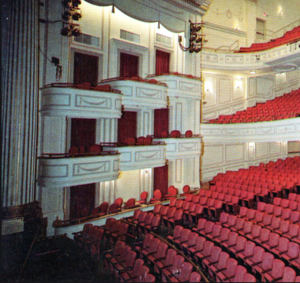 New Haven, CT - Ryan P Cyr, originally from Fairfield, CT, is returning to Connecticut performing as part of The Shubert Theatre’s third installment of its signature fundraiser, “Next Stop: New Haven”, on Monday, October 26, 2020 at 7:30pm, celebrating New Haven’s culinary scene, Broadway’s rising stars and the beloved theatre. Following a successful at-home event in May, the $75 ticket to the October celebration will once again include a curated box of food and beverage goodies and a link to access the live, streaming program which will include a cocktail making class with Jason from Continuum Distilling and Black Hog Brewing, Broadway music trivia, and musical entertainment and performances.

Cyr, who was slated to perform at The Shubert in the 2019-2020 Broadway series in “Bandstand,” will be one of the rising stars of Broadway performing, in addition to:

In addition to the ticket supporting the beloved New Haven restaurants featuring goodies in the party box, as well as the Shubert Theatre, event organizers are inviting ticketholders to bring a non-perishable food donation to the theatre when picking up the party boxes to benefit food pantries in New Haven.

Tickets are now available for this “limited seating” event through the theatre’s website.  Ticketholders will be contacted by the theatre to coordinate curbside pick-up of the boxes the afternoon of Monday, October 26 at The Shubert Theatre.

More information on the event and the link to purchase: https://shubert.com/shows-events/next-stop-new-haven-at-home.

About the Shubert Theatre

Opened in 1914, the Shubert Theatre, located in the heart of downtown New Haven, Connecticut, is a historic space best known for its pre-Broadway and Broadway series presentations, as well as performances of dance, cabaret, music, comedy, solo performances and family entertainment.  In addition to presenting more than 600 pre-Broadway tryouts, world and American premieres over its storied 100+ year history, the not-for-profit organization fulfills its mission of making culture and performing arts accessible to the community at large through accessible programming and education and outreach offerings.  Theatre operations are supported by the generosity of loyal individual donors, corporate sponsors and grant funders. With more than 150 events and performances each year, the Shubert Theatre drives thousands of patrons to local restaurants and small businesses.  The facilities’ fully-restored Broadway style theatre and other spaces are also available for private and public event rentals.

The Shubert Theatre is owned and operated by CAPA (Columbus Association for the Performing Arts), a not-for-profit, award-winning presenter of national and international performing arts and entertainment.  The organization also owns and operates the Ohio Theatre, Palace Theatre and Southern Theatre, located in downtown Columbus, Ohio, and manages other Ohio venues including the Drexel theatre, Riffe Center Theatre Complex, Lincoln Theatre and McCoy Center for the Arts.

Ryan P Cyr, originally from Fairfield, trained at Broadway Method Academy and Rockwell Dance Center before attending Point Park University and pursuing a BA in Dance. Ryan took a leave of absence to join the 2016-2018 West Side Story International Tour. He was most recently seen on the 1st National Tour of Bandstand. Ryan’s BMA credits include Hair (Berger), Carousel, and Evita. For more info, check out ryanpcyr.com

Courtnee Carter, is a New York City based Broadway and television actress originally  from Jacksonville, Florida. Credits include: Broadway: Once on this Island. Off- Broadway East O’ West O’.  Tours:  Once on this Island; Junie B. Jones...Essential. Television: The Path; A Crime to Remember. Courtnee is a proud graduate of the University of North Carolina School of the Arts.