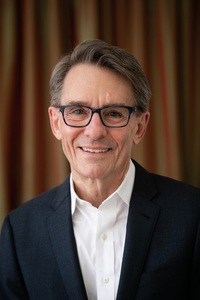 Westport, CT - Westport Country Playhouse will present the premiere of “Cocktails with Mark,” a virtual discussion series hosted by Mark Lamos, Playhouse artistic director, on Thursday, November 19, at 7 p.m. The event will be streamed from Lamos’ home in Sherman, Connecticut, on Facebook Live and YouTube. The conversation will run approximately 20 minutes and is free of charge.

Kicking off the series will be a Q&A with Lamos about the upcoming season’s plans, productions, directors, casting, as well as his theatrical career. Lamos will answer questions that have been submitted by the Playhouse family: its donors, audience members, fellow art-makers, community, and friends.

“I’m hosting a cocktail party at my home, virtually, and you’re invited!,” said Lamos. “We’ll mix it up and have a chat about topics you’d like to explore. Let’s keep connected during the winter months until the Playhouse opens again.”

Lamos has helmed many plays at Westport Country Playhouse since 2008, earning Connecticut Critics Circle Awards for his direction of “She Loves Me” (2010), “Into the Woods” (2012), “The Dining Room” (2013), “Man of La Mancha” (2018), and “Mlima’s Tale” (2019).  Under Lamos’ artistic direction, the Playhouse was named “Theater Company of the Year” by The Wall Street Journal in 2013. Lamos’ extensive New York credits include “Our Country's Good,” for which he received a Tony Award nomination. A former artistic director at Hartford Stage, he earned the 1989 Tony Award for the theater's body of work. He was awarded the Connecticut Medal for the Arts as well as honorary doctorates from Connecticut College, University of Hartford, and Trinity College. In 2016 he was the recipient of the John Houseman Award.

“Cocktails with Mark” will continue monthly during the fall and winter, exact dates to be announced. “I’ll be asking other theater artists and Playhouse favorites to join in our chats,” Lamos added. “Cocktails with Mark” carries on in the tradition of the “Coffee Break” virtual conversations on Playhouse social media last summer.

Due to the global pandemic, the Playhouse remains closed since last March. Reopening plans will “follow the science,” according to Lamos.

For Westport Country Playhouse information, visit westportplayhouse.org, leave a message on the box office voicemail at (203) 227-4177, or email at  This email address is being protected from spambots. You need JavaScript enabled to view it. . The Playhouse’s physical box office is closed during the pandemic, but staff is working from home, returning phone messages and answering emails. Please understand with the high volume of inquiries, it may take up to 72 hours to respond. Stay connected to the Playhouse on Facebook (Westport Country Playhouse), follow on Twitter (@WCPlayhouse), and on YouTube (WestportPlayhouse).

The mission of Westport Country Playhouse is to enrich, enlighten, and engage the community through the power of professionally produced theater of the highest caliber and the welcoming experience of the Playhouse campus.  The not-for-profit Playhouse provides this experience in multiple ways by offering live theater experiences of the highest quality, under the artistic direction of Mark Lamos; educational and community engagement events to further explore the work on stage; the New Works Initiative, a program dedicated to the discovery, development, and production of new live theatrical works; special performances and programs for students and teachers with extensive curriculum support material; Script in Hand play readings to deepen relationships with audiences and artists; the renowned Woodward Internship Program during the summer months for aspiring theater professionals; Family Festivities presentations to delight young and old alike and to promote reading through live theater; youth performance training through Broadway Method Academy, Westport Country Playhouse’s resident conservatory program; and the beautiful and historic Playhouse campus open for enjoyment and community events year-round.  Charity Navigator has recently awarded its top 4-star charity rating to the Playhouse in recognition of its strong financial health and commitment to accountability and transparency.