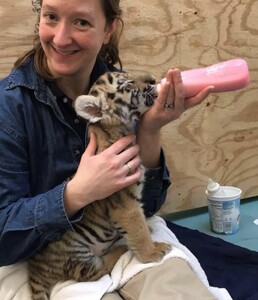 GREENWICH, CT — The Bruce Museum’s series of monthly programs featuring thought leaders in the fields of art and science continues on Thursday, December 3, at 7:00 pm with The Origin of Species...Survival Plans. This Bruce Presents virtual webinar via Zoom brings together a panel of experts who will launch a deep dive into the remarkable programs studying and now saving hundreds of endangered and at-risk species worldwide.

Joining this conversation about the need to develop Species Survival Plans and how they’re being implemented on an international scale are Christopher S. Gentile, Director of the Western North Carolina Nature Center in Asheville, NC, and three wildlife conservation experts from Connecticut’s Beardsley Zoo: Curator of Education Jim Knox, Animal Care Specialist Bethany Thatcher, and Deszani Flemmings, coordinator of the Conservation Discovery Corps team at the zoo in Bridgeport.

Admission to the virtual Bruce Presents program, The Origin of Species...Survival Plans, is $20 for non-members; Museum members receive a 20% discount. To make a reservation to participate in the webinar, visit brucemuseum.org or call 203-869-0376. Support for Bruce Presents programs is generously provided by Berkley One, a Berkley Company, Connecticut Office of the Arts, and Northern Trust.

With examples from mammals to reptiles to even often overlooked insects, you will learn not only what resources are required to effectively steward critically endangered species worldwide, but also begin to understand why public education about Species Survival Plans remains ultra-critical to the success of every single effort.

Chris Gentile began his zoo and aquarium career in 1994 at the Cincinnati Zoo & Botanical Garden. He held management positions at Roger Williams Park Zoo in Providence, Franklin Park Zoo in Boston and Riverbanks Zoo & Garden in Columbia, SC, prior to being appointed director of Western North Carolina Nature Center in Asheville, NC, in 2009. In February, 2019, the Center opened a new Pre-historic Appalachia exhibit for red panda, making a connection between the fossils of the extinct Bristol’s Panda, found in the tri-cities area of Eastern Tennessee, with their closest living relative.

Gentile received his Bachelors of Science in Biology from Clark University in Worcester, MA in 1992 and his Masters in Secondary Education from the University of Bridgeport, CT in 1993. He recently finished a 4-year term as a member of the Board of Directors for the Association of Zoos and Aquariums (2016-Sept 2020), and served as chair of AZA’s Conservation Education Committee (2004-06) and Chair of the Professional Development Committee (2014 -15).

Jim Knox serves as the Curator of Education for Connecticut’s Beardsley Zoo in Bridgeport, where he directs educational programming and conducts field conservation for this AZA-accredited institution.

Knox is a graduate of Cornell University where he studied Animal Science and Applied Economics. He has studied Great White Sharks in South Africa, conducted field research on Alaskan Brown Bears, field conservation for Atlantic Salmon, and written nationally for the U.S. Fish and Wildlife Service. A member of The Explorers Club, Knox has served as an on-camera wildlife expert for The Today Show and The CBS Early Show and has lectured for The Harvard College Conservation Society. Knox writes a column, Wildly Successful, for The Greenwich Sentinel and is proud to serve as a Science Adviser to The Bruce Museum.

Bethany Thatcher is an Animal Care Specialist at Connecticut’s Beardsley Zoo where she performs daily husbandry for a variety of critically endangered species, including birds of prey and large carnivores.  Bethany serves as the Training Coordinator for this AZA facility, overseeing the behavior modification program for the entire zoo.

Thatcher is an honors graduate of Marist College, where she earned her Bachelor of Science in Biology. She has conducted field research on Black Howler monkeys with the Wildlife Conservation Society in Belize and with The National Audubon Society for Project Puffin in Maine. Thatcher has been a leading member in the Connecticut Chapter of the American Association of Zoo Keepers for over 15 years and has served as Chapter President. She has presented at national conservation conferences on hand raising carnivores and animal training.  She prides herself on her success training the animals in her care to accept hand injections, eliminating the need for darting. She has also successfully hand-reared many carnivores over the years, including Amur Tigers and the world’s rarest cat—the Amur Leopard.

Deszani Flemmings began his journey in Kingston, Jamaica, as a volunteer at the Hope Zoo where he quickly realized his passion for conservation and recognized the need for educational programming. Upon immigrating to the U.S.A., he interned at Connecticut's Beardsley Zoo where he presented wildlife programs. At the end of 2016, he was hired by Animal Embassy as an Animal Care and Education Specialist.

While at Animal Embassy, he designed interactive educational programs for students of all ages, while still volunteering at Connecticut's Beardsley Zoo. In 2019, Flemmings joined the Conservation Discovery Corps team at the zoo as a coordinator and has led the team in conservation efforts, including Monarch Watch, invasive plant removal, endangered freshwater mussel identification and population counts, Canada goose banding, Horseshoe crab tagging, as well as a multitude of in-person programs on and off zoo grounds.

The speakers’ presentation will be followed by a Q&A session, moderated by Leonard Jacobs, producer of the Bruce Presents series. Visit brucemuseum.org or call 203-869-0376 to reserve your place in this virtual program on Thursday, December 3, starting at 7:00 pm.