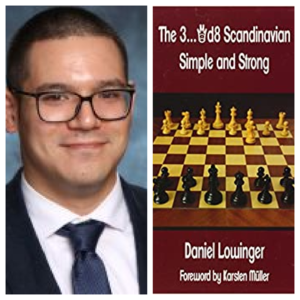 Southport, CT - Join Pequot Library as Daniel Lowinger, the author of "The 3…Qd8 Scandinavian: Simple and Strong" and "Opening Originals: Strong Sidelines for Club Cats", talks about chess, the culture, the drama "The Queen’s Gambit", and more. Lowinger believes one of the things that surprises chess players is that there are a varied set of skills that they can bring to the game. Many believe there is an association with chess and mathematical skills. Lowinger will be the first to say that he is not a math whiz, and in fact has no affinity for math at all, despite being one of the best chess players in the country. He points out that since chess is such a complicated game, players can really approach it from many different angles.

Lowinger is an active chess player, coach and teacher (of both chess and Chinese). Lowinger is a USCF-certified life master, the highest certified national title. The United States Chess Federation awards the national master title to any player who reaches a rating of 2200. Less than 1 percent of rated players hold the title. A life master is a national master who has played 300 games with a rating over 2200. Daniel is the author of two acclaimed books on chess strategy and cofounder of The Chess Club of Fairfield County. He lives with his wife in Alexandria, Virginia.

To register go to: https://www.pequotlibrary.org/event/mta-daniel-lowinger/