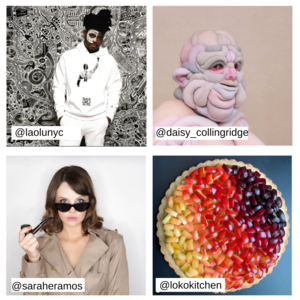 GREENWICH, CT — Once upon a time, visual artists had to forge their way toward success using such primitive forms of marketing as opening their studios, cultivating buyers, charming the pants off of gallerists, and creatively spreading word of mouth. Today there's Instagram, a platform where artists can show off the gift that produces their work, but, even more than that, can inspire literally tens of thousands or even hundreds of thousands of people to follow them and to engage in a rich, spirited, ongoing dialogue about their work.

The Artists of Instagram: Everything You Always Wanted to Know and Aren't Afraid to Ask, a Bruce Presents webinar on Thursday, March 4, 2021, 7:00 – 8:30 pm, showcases four extraordinary artists who have not only built substantial followings on Instagram, but also represent a revolution in terms of how we define what makes someone a successful contemporary artist.

From Daisy Collingridge (@daisy_collingridge), whose draped and tufted sculptures serve as evocative representations of the body and soul; to Lauren Ko (@lokokitchen), a baker whose visually exquisite edibles challenge traditional definitions of art itself; from actor-filmmaker Sarah Ramos (@saraheramos), whose teenage pursuit of celebrities grew into a provocative visual meta-commentary; to artist-musician Láolú Senbanjo (@laulunyc), whose breathtaking take on Afromysterics caught Beyoncé's eye – these artists are singular in their approach and collectively representative of a generation for whom Instagram is a key element of their practice.

The Artists of Instagram: Everything You Always Wanted to Know and Aren't Afraid to Ask will be moderated by Bruce Presents co-producer Leonard Jacobs; a Q&A session will follow the conversation among the IG artists. Admission to the webinar is free for Museum members and $20 for non-members; students receive a 20% discount. To register, visit brucemuseum.org or call 203-869-0376, ext. 311. Support for Bruce Presents programs is generously provided by Berkley One, a Berkley Company, Connecticut Office of the Arts, and Northern Trust.

More about our Bruce Presents panelists and Instagram artists:

Daisy Collingridge studied Fashion Design at the renowned Central St. Martins in London, receiving her BA in 2014. Since graduating, her work has morphed into a multi-disciplinary art practice. Her work sits in an awkward space between sculpture, theatre, and art. The “Flesh Suits” or “Squishes” explore fabric, form, and flesh. At the core of her work are traditional craft techniques like free machine quilting, applique, and pattern cutting. Daisy has won the international award at the World of Wearable Arts, exhibited at Alexandra Palace in London, and has been featured in numerous art publications, including the magazines Hi Fructose, Trebuchet, DesignBoom, Dezeen, Dazed Digital, Arte Tracks, and Observer

Lauren Ko is an artist, self-taught home baker, and author of the best-selling cookbook, “Pieometry.” Her colorful geometric style made all hell bake loose on the frontier of contemporary pie art, and her iconic signature spoke design has been dubbed the “modern lattice.” Her work has been widely featured in publications such as Vogue, O Magazine, Buzzfeed's Tasty, and on-screen in Martha Bakes and CBS’ Sunday Morning. Lauren has roots in sunny San Diego, but is currently based in Seattle, with her partner, Ben, and their bear dog, Santi.

Sarah Ramos is a filmmaker, writer, and actor. She starred as Haddie Braverman on the NBC drama series Parenthood from 2010 until 2015. Most recently, she emerged on Instagram feeds with her DIY re-enactments of cult-favorite movie/TV scenes and pop culture moments (“Quarantscenes”). She has written and directed short films (The Arm and Fluffy) as well as the 2017 web series City Girl, which she also starred in at age 25 after writing the script at 12. Her latest projects include creating the Autograph Hound zine in collaboration with THNK1994 Museum, directing an episode of Marvel 616, and creating and co-hosting The Renner Files podcast.

Láolú Senbanjo is a Nigerian-born, Brooklyn-based visual artist, singer, songwriter, musician, and human rights lawyer. Láolú has always had a desire to help others and reveal their truth. He does this through a way that comes most naturally to him: Art. After practicing law for three years, he quit his job, moved to New York City and has been creating ever since. Láolú is guided by the idea that all surfaces are his canvas. His unique technique, which he coined as the Sacred art of the Orí, is based on the Yoruba religious practice of becoming one with yourself or awakening the God in you (Orí).

To participate in The Artists of Instagram virtual program on Thursday, March 4, starting at 7:00 pm, visit brucemuseum.org or call 203-869-0376, ext. 311. The Bruce Museum’s virtual series of conversations among thought leaders in art and science continues on Thursday, April 8, with Women in Contemporary Science: How to STEM the Leaky Pipeline.