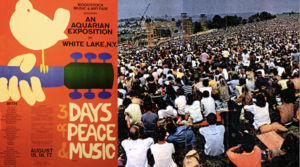 Fairfield, CT - The Regina A. Quick Center for the Arts has teamed up with the Music Department and the Visual and Performing Arts Department of the College of Arts and Sciences for an Open VISIONS Forum Espresso virtual lecture that will explore the rock culture myths and history of the 1969 music festival in upstate New York.

Whether the mention of Woodstock brings to mind “peace, love, and music” or “hippies, drugs, and mud,” it seems that people all over the world know something about the three-day rock concert that took place in upstate New York in the summer of 1969.

Sabine Nikolay was an 11-year-old girl growing up in Austria during the 1970s when she first popped a music cassette into her tape player and was captivated by the powerful blues vocals of the swaggering 2 a.m. festival performance that skyrocketed Janis Joplin to superstardom. Nikolay’s passion for rock music and her fascination with Woodstock never left her; on the 40thanniversary of the festival in 2009, she traveled to the United States as a radio journalist on assignment to create an hour-long Woodstock feature and prepare to host a three-hour live broadcast about the event for her radio station.

In a virtual OVF Espresso lecture on Tuesday, April 6 at 3 p.m., “From Vienna to Woodstock: A European Look at Rock Culture Myths and History” Sabine Nikolay will share the experience of her 3-week odyssey to America in search of first-hand knowledge of the Woodstock festival. “I was surprised how open and friendly most of the Woodstock veterans were when I approached them asking for interviews,” Nikolay shared recently. “I was amazed by the stories they told me.”

Among the many personal Woodstock remembrances Nikolay will share in her lecture, the most surprising one for her was revealed during a conversation with Wavy Gravy, who disparaged the enduring myth of Woodstock as a “peace and love” event. “He told me about a hot dog vendor on the festival grounds who raised the prices for his product by the hour when food shortages became more and more obvious,” she recounted. “[The hot dog vendor] tried to make a profit out of people who were hungry. So at night, people burned his stand down.”

After returning to Austria in 2009, Nikolay realized she had amassed enough material on Woodstock to not only fill her radio programs, but to also write a “road trip book.” Recently published in Austria, Playground of the Millionaires: Woodstock Revisited, shares her transatlantic cultural adventure and the many encounters with Woodstock veterans she met along the way.

Livestreaming from Vienna on April 6, Nikolay will join in a virtual panel discussion with Charlie Seton Jr. and Brian Q. Torff. Seton is the son of the late Charles B. Seton, a prominent New York attorney whose clients in the rock industry included the promoters of the Woodstock Music Festival: Artie Kornfeld, Michael Lang, John Roberts, and Joel Rosenman.

Torff is a bassist, composer, author, and professor of music at Fairfield University. Reflecting on the public’s enduring fascination with Woodstock, he said recently, “This was an iconic event that only happened as a sign of that period. It cannot be replicated, though some have tried.” Asked how the music of Woodstock has influenced his own work as a musician and professor, Torff noted, “There is a spirit in the music that is timeless and important. We can still draw on this for inspiration.”

The Quick Center’s OVF Espresso Series virtual event “From Vienna to Woodstock: A European Look at Rock Culture Myths and History” with Sabine Nikolay is presented in affiliation with the College of Arts and Sciences’ Department of Music and Department of Visual and Performing Arts. This lecture is free and open to the public. For more information visit quickcenter.com, and to attend virtually on Tuesday, April 6 at 3 p.m. tune in to thequicklive.com.