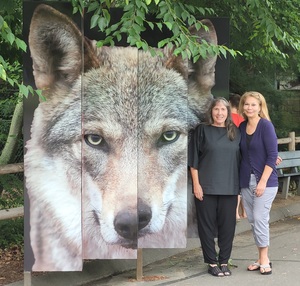 BRIDGEPORT, Conn. – When a passionate group of animal lovers, board members, and Zoo supporters get together, the outcome is a fabulous way to raise funds for Connecticut’s Beardsley Zoo. A group of women and men from around the region have joined forces to create the Zoo’s third in-person Endangered Species Gala, this time also celebrating the Zoo’s Centennial year. The elegant evening affair, designed to raise money to support the Zoo’s collection of endangered species and enhance habitats, will be held on October 29, 2022, at the Inn at Longshore in Westport.

Co-chaired by Sonja Narcisse of Fairfield and Claudette Kunkes, PhD, of Westport, both Connecticut Zoological Society members of the Board of Directors, this year’s Gala will feature cocktails and animal encounters, a seated dinner, silent and live auctions, and musical entertainment from the Glenn Lesiw Trio.

Melissa Sheketoff, host of WICC’s Melissa in the Morning will act as emcee, and Jim Breheny, Director of the Bronx Zoo, is the guest speaker. A special VIP cocktail hour will feature Master Falconer Brian Bradley and his Sky Hunters in Flight. Tickets start at $250/person; $500/person includes the VIP cocktail hour.

“The Centennial Gala is an opportunity to celebrate the important species-saving work of the Zoo over many years,” said Narcisse, committee co-chair. “Once you realize the steps that are being taken by our Zoo to help sustain the future of wildlife, it’s impossible not to want to help them continue their work.”

The Zoo is seeking sponsors for the event. Beginning with an exclusive presenting sponsorship priced at $25,000, there are multiple opportunities for corporations and individuals to contribute. Interested supporters can contact Ashley Volkens, at 203-394-5522, or at  This email address is being protected from spambots. You need JavaScript enabled to view it. .

“Today’s zoos are dedicated to conservation, research, education, and exceptional guest experience,” said Zoo Director Gregg Dancho. “As animals continue to disappear in the wild, and as the ‘wild’ itself disappears due to deforestation and human interaction, the role of accredited zoos becomes more important in ensuring our grandchildren can see a live tiger, for instance, instead of just a picture of what one used to look like.”

“Our mission to educate and contribute to conservation efforts is helped in a very large way by our volunteers and committee members,” Dancho added. “We’re grateful for their assistance.”

member zoos.  Connecticut’s Beardsley Zoo is home to a number of endangered species, including two of the world’s rarest big cats, the Amur leopard and Amur tiger, Chacoan peccaries, golden-lion tamarins, Mexican and red wolves, and red pandas. Other Zoo residents are considered vulnerable or threatened. Connecticut’s Beardsley Zoo is a non-profit organization celebrating its Centennial year when the mission of helping fragile wildlife populations and eco-systems is more important than ever.