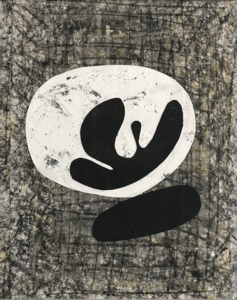 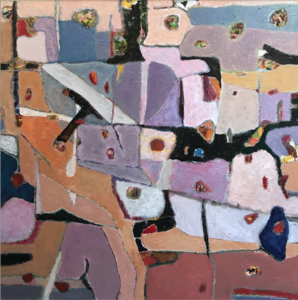 Fairfield, CT - The Bruce S. Kershner Gallery in the Fairfield Public Library invites the public to a reception for “Moving Lines”, artwork by Mary Manning and Charles Douthat, on Thursday, October 27 from 5:30 to 7:30 pm. They will talk about their work at 6:15. The show can be seen from October 15 to December 10  during library hours. 1080 Old Post Road in Fairfield.

Mary Manning has been a resident of Darien for 40 years and an artist all of her life. She is a graduate of Marymount Manhattan College, and she continued her education with studies in graphic design at The School of Visual Arts. She also studied weaving and jewelry making at The Cleveland Institute of Art. She was a graphic designer and art director in NYC for many years at WNET/13, before focusing exclusively on fine art.
Mary is a member of Silvermine Guild of Artists and the Center for Contemporary Printmaking in Norwalk, CT. Her monotypes and mixed media works have won many awards in area shows  She maintains a studio at Firing Circuits in Norwalk and is represented by Cynthia Byrnes Contemporary Art (CBCA) in Westport.
Mary says, “I am a visual artist who works with diverse media and processes, ranging from printmaking to alcohol inks to vintage fabric dying. ...I experiment with new materials, often creating combinations of media. To create the work on wood, I experimented with encaustic monotypes with pigments mixed with hot liquid wax. Once dry, I cut the monotypes into shapes and apply them to wood panels. Also in the show, are monotype collages and others with fabric, paper, sisal, bark, and other found materials... They can be arranged and re-arranged in nearly infinite combinations. I like to think that the viewer will interact with these pieces, entering this "conversation" and perhaps mentally re-arranging them.”
Charles Douthat is a self-taught painter working within the traditions of abstract expressionism and lyrical abstraction.  He is a graduate of Stanford University and the University of California, He began painting ten years ago. He has exhibited in group shows at the Artists Collective of Westport, the Westport Art Center, the Wilton Library, the Institute Library in New Haven, and the Ridgefield Guild, and had a solo show at Metro Art Studios in Bridgeport.  A video of the show created by Miggs Burroughs can be viewed at charlesdouthat.com or on Youtube.  I’m a member of WestonArts and the Artists Collective of Westport.  I’m also an award-winning poet.
He states, “I paint in acrylics, usually on large canvas, but sometimes on recycled surfaces. ...my paintings usually begin with a personal feeling of restlessness, an empty canvas and a brush, and tube of paint I pick up more or less at random. Often in a painting's early stage I'll create an appealing shape or line or color combination which out of uncertainty I'll want to save. Strangely, only when I sacrifice this attractive area by painting on or over it is something more original released, something which belongs both to the painting's physical presence and my feelings that are seeking expression. Often through these moments of letting go, enduring forms are revealed. Perhaps some part of each painting's depth is generated by the half-visible remainders of earlier stages I've sacrificed. You might call these remainders the ghosts of those not-quite-beautiful things I've destroyed.”