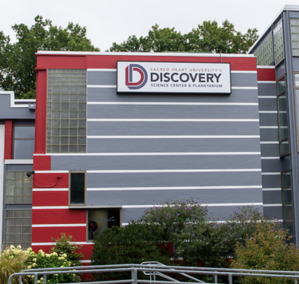 FAIRFIELD, Conn.—Sacred Heart University’s Discovery Science Center & Planetarium (DSCP) will honor Igor I. Sikorsky, founder of Sikorsky Aircraft, at the opening of its newest exhibit on Sunday, Oct. 2, at 5 p.m.

Igor I. Sikorsky was a pioneer in airplane and helicopter development. Thanks to the generosity of Sikorsky Aircraft and the Igor I. Sikorsky Historical Archives―the nonprofit organization dedicated to acquiring, managing, and sharing documents and memorabilia of the famed aviator-engineer―the DSCP exhibit will educate visitors on Sikorsky’s life and legacy.

The new display was added to DSCP’s existing “Science in Flight” gallery. It has a large graphic timeline of Sikorsky’s life and accomplishments. Erika Eng, DSCP director, said Archive volunteers played a crucial role in organizing the timeline and making sure events were detailed accurately.

Dan Libertino, president of the Archives, said, “This is what we do. We preserve the legacy of Igor and his company, making it available for generations to learn from.”

The Archive also provided signage and aircraft models for the exhibit. Archive volunteers will be available to answer questions and provide insights into the Sikorsky legacy.

“It’s really an excellent piece to spark intergenerational learning,” Eng said. “Grandparents and their grandchildren can have real conversations around innovation and flight and, of course, Sikorsky’s brilliance. We even have a video of flight footage donated by the Archives running on a loop outside of the flight simulator, which also features actual decommissioned helicopter cockpit pieces, generously donated by Sikorsky,” she added.

The Sikorsky engineering team partnered up with the DSCP’s technical staff to create this simulator. Equipped with a 3D-printed aircraft cockpit, pilot controls and simulated visuals, guests will experience what it takes to fly an airplane or a helicopter. They will become a pilot for a day and discover the science of flight firsthand.

In addition to the historical display, Sikorsky, a Lockheed Martin company, has donated an aircraft model to the DSCP. A replica of the new U.S. Marine Corps Heavy Lift Helicopter, the 53K King Stallion, the aircraft model will greet all guests as it hovers in the Discovery Center’s atrium. The CH-53K is designed to move Marines and their equipment from ship to shore anywhere in the world that they are needed. The aircraft is an engineering marvel capable of lifting 35,000 pounds and 30 passengers or troops and their equipment. The donations reflect Lockheed Martin’s commitment to science, technology engineering and math education.

Libertino, who worked at Sikorsky Aircraft for 41 years, noted that many children visit the DSCP. Now, he said, they can see “what Igor accomplished at 18-years old. He had genius instincts … Maybe seeing this exhibit will motivate and inspire young people.”

Media who would like to attend the ribbon cutting can RSVP to Kim Swartz at  This email address is being protected from spambots. You need JavaScript enabled to view it. . Visit the DSCP webpage to learn more about its exhibits.