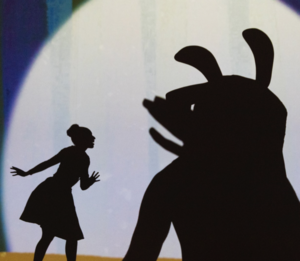 The imaginative musical is appropriate for grades pre-K and up and runs approximately one-hour in length. Tickets are $25 each.

In “Woof Woof the Shadow Pup,” little Lucy faces big feelings during her day, but words to express herself do not come easily. With the help of her dad and a flashlight, Lucy discovers Woof Woof the Shadow Pup who encourages her to speak from the heart and share her emotions. Along the way, Lucy finds action-packed adventure in magical worlds filled with enchanted castles, rocket ships, and zany zoo animals.

“Woof Woof the Shadow Pup” illuminates the importance of understanding and acknowledging the emotional life of young children. This inspiring story is an invitation for families to experience the magical world of shadow theater where adventure and possibility are never-ending.

The producing team for “Woof Woof the Shadow Pup” includes Becca Moore Winter, creative director. She is an accomplished professional dancer, choreographer, and director who has toured all over Europe, Dubai, and the United States working with the modern dance company, Pilobolus, and shadow dance troupe Catapult, performing on “America’s Got Talent” in the final rounds at Radio City Music Hall.

Nancy Close, creator of Woof Woof children’s character, is a professor at the Yale Child Study Center.  She counsels families and educators on early childhood development. Close has seen first-hand how the imaginary world of shadows can simultaneously excite and calm children and get them to open up about experiences they may otherwise have a difficult time sharing.

J. Walter Hawkes, composer, has played or recorded with Norah Jones, Elvis Costello, John Lithgow, The Four Tops/Temptations, Madeleine Peyroux, Slide Hampton, and Kat Edmonson Walter, among others. He composed for many television shows and films, including “Blue’s Clues,” “Wonder Pets,” “Third & Bird,” “Bubble Guppies,” and was the music director/lead composer for “Peg + Cat” on PBS.

Support for the 2023 Education Program comes from the Eunice and David Bigelow Foundation; The David and Geri Epstein Foundation; George A. and Grace L. Long Foundation; Adolph and Ruth Schnurmacher Foundation, Inc.; and Roz and Bud Siegel.

Masks are encouraged, but not required. For updates on Covid-19 health and safety protocols at the Playhouse, visit https://www.westportplayhouse.org/visit/covid19safety/

All artists, titles, dates, and times are subject to change.