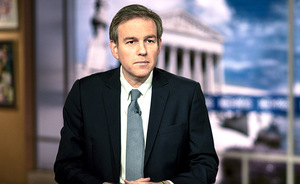 Fairfield, CT - Fairfield University’s Regina A. Quick Center for the Arts will welcome Bret Stephens, op-ed columnist for The New York Times and senior contributor to NBC News, for an Open VISIONS Forum lecture on Thursday, Jan. 26 at 7:30 p.m.

During his 16 years at The Wall Street Journal, Stephens wrote the neoconservative foreign-affairs column “Global View,” for which he won the 2013 Pulitzer Prize for Commentary. At the age of 28 he was appointed editor-in-chief of The Jerusalem Post and spent several years there. He is currently an op-ed columnist for The New York Times and senior contributor to NBC News.

Stephens is the author of America in Retreat: The New Isolationism and the Coming Global Disorder (2014), and co-author of Has Obama Made the World a More Dangerous Place?: The Munk Debate on U.S. Foreign Policy (2015).

Having reported from around the world and interviewed scores of world leaders, Stephens has received numerous awards and distinctions, including being named a Young Global Leader by the World Economic Forum (2005) and earning the 2008 Eric Breindel Award for Excellence in Opinion Journalism. He was born in New York City, raised in Mexico City, and holds a BA in political philosophy from the University of Chicago and a master’s degree from the London School of Economics.

The Open VISIONS Forum featuring Bret Stephens is supported, in part, by Moffly Media, Delamar Southport, Delamar Spa, Artisan, Westport Journal, and Wealthspire Advisors. Tickets are on sale now at quickcenter.com for $30, or $20 for Quick Members. Enjoy a Cocktail Reception before the event for $100. For more information, contact the Quick Center Box Office at 203-254-4010, Monday through Friday, from 12 to 5 p.m.

Fairfield University is a modern, Jesuit Catholic university rooted in one of the world’s oldest intellectual and spiritual traditions. More than 6,000 undergraduate and graduate students from the U.S. and across the globe are pursuing degrees in the University’s five schools. Fairfield embraces a liberal humanistic approach to education, encouraging critical thinking, cultivating free and open inquiry, and fostering ethical and religious values. The University is located on a stunning 200-acre campus on the scenic Connecticut coast just an hour from New York City.