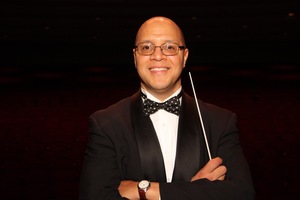 BRIDGEPORT, CT - The Greater Bridgeport Symphony will be showcasing sought after guest conductorChelsea Tipton II, an already well-known talent in our area as Pops Conductor for the New Haven Symphony Orchestra, at The Klein Memorial Auditorium in Bridgeport, CT on Saturday, March 18 at 8:00pm for their Third Turn.

The show will feature Beethoven’s great “Symphony No. 7.” Its second movement “Allegretto” will be familiar to many as the dramatic backdrop to King George VI’s oration in the film, The King’s Speech, as well as many other movies. Acclaimed young cellist Sterling Elliott will perform the dazzling Dvořák “Cello Concerto” while “Global Warming,” a composition by award-winning composer Michael Abels, will round out the program.  Abels work has been featured in films such as Get Out, Nope, and more.  The piece was written in 1990 to describe the changes in the political climate of the world as Communism collapsed, but Abels says, “At the time of its premiere, ‘global warming’ was not the politically charge term it is today.  The piece was not written as a political statement, but its political message has inevitably deepened as climate change has evolved from theory into reality.”

Tipton is no stranger to GBS.  He conducted a memorable and Covid-safe outdoor concert in September of 2020 at Indian Ledge Park in Trumbull at the height of the Pandemic.  With a reduced number of musicians and an audience spread out over an acre, Tipton thrilled the crowd with the only full orchestra concert presented in our region at that time.  This concert paved the way for GBS’ successful online season in 2020-21.  GBS was one of only four of the 1,710 orchestras in the country to put forward a full-orchestra season of music during those difficult days.  Tipton returned to Bridgeport in September 2021, conducting GBS in a well-attended pops concert at Bridgeport’s Hartford Healthcare Amphitheater.  “I am so excited to work with the Greater Bridgeport Symphony again,” says Tipton.  “This will be my third visit with them, and we have a fantastic program to share with the community.  Sterling Elliot will be playing one of the greatest works ever written,  Dvořák’s ‘Cello Concerto,’ a true masterpiece admired for the beautiful orchestral music and the lyricism Dvořák gives to the cello.  Then we will close out the concert with the dramatic Beethoven ‘Symphony No. 7,’ a work filled with optimism and joy, despite the many challenges in his life.”

Tipton will also conduct a special concert with GBS featuring Saint-Saëns’ Symphony No. 3, with organ soloist Glen Segger, on Friday May 5, 2023 at St. Peter’s Church in Danbury.  Information on this event will be released shortly.

GBS has hosted conductor-candidates Eduardo Leandro (November 2021), Benjamin Hochman (November 2022) andChelsea Gallo (December 2022), as anticipation builds over the selection of a successor to the beloved Eric Jacobsen, who has led GBS since 2014.  GBS plans to announce the identity of its new Music Director at the final concert of the season,Godspeed Maestro Jacobsen, on April 8 at The Klein, which will be Eric Jacobsen’s farewell performance as Music Director.