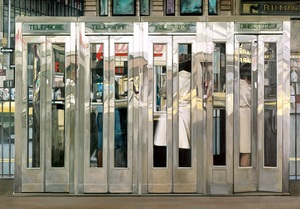 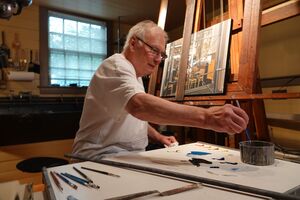 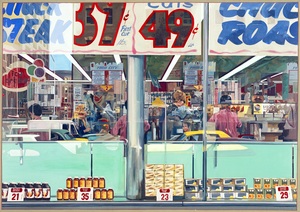 Bridgeport, CT - On Friday, September 25, marvel at stunning paintings created by photorealist icon Richard Estes. With unmatched access to the artist and his most important works, the film “Actually Iconic: Richard Estes”, presented online by the Housatonic Museum of Art at 7pm, invites viewers into the world of this celebrated, premier painter of American cityscapes.

Considered one of the founders of the international photorealist movement of the late 1960s, Estes, alongside greats such as John Baeder, Ralph Goings and Chuck Close, replicated the appearance of a photograph onto canvas through layering and merging multiple viewpoints with painstaking precision to create rich, complex urban scenes.

Estes avoided media attention throughout his long career, until this film, at age 87, he revealed the techniques and the inspiration behind his art. Director Olympia Stone creates a sensitive portrait of this innovative artist that will have you giving his work a second, or third, worthwhile look.

The film is part of an exceptional online, art-inspired film series presented by Housatonic Museum of Art and curated by the Connecticut Film Festival, and will go online at 7pm on Friday, September 25th. A question and answer session with Olympia Stone will follow the film. Visit www.HousatonicMuseum.org for the film link.

Mark your calendar for the entire ‘Friday Night Flicks’ series, with all films going online from the Housatonic Museum’s website at 7pm.

Upcoming films in the series include:

October 2: “Double Take: The Art of Elizabeth King” followed by Q&A with director: Olympia Stone. Enter the world of sculptor and stop-action filmmaker Elizabeth King, who embarks on each new project by posing a single question to herself: “Can this be physically done?” This documentary explores King’s passion about the mind/body riddle, the science of emotion, the human/machine interface, and those things a robot will never be able to do.  From studio to exhibition, and in conversations with fellow artists, curators and critics, the film asks what looking at and seeing one another means in an increasingly mediated world.

October 9: “Nothing Changes: Art For Hank’s Sake.”  How far would you go to pursue your passion? At 87 years old, Hank Virgona commutes to his Union Square studio six days a week and makes art. Despite poor health, cancer, lack of revenue and obscurity as an artist, Hank is unrelenting in his quest to understand how life and art are the same.

October 16: “Curious Worlds: The Art & Imagination of David Beck.”  This film pulls back the curtain on artist David Beck: a master sculptor, carver, and miniature architect who works in a fantastical genre all his own, creating intricate worlds that are alive with magical and brilliant observations. His pieces have been shown at the MET, the Guggenheim, and some of the world’s most prominent galleries.  His work, "MVSEVM" was commissioned by the Smithsonian American Art Museum, where it is on permanent display.  To the larger public, though, he is virtually unknown.