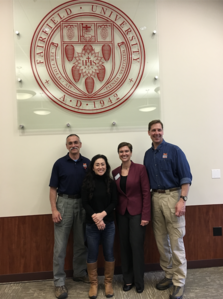 BRIDGEPORT, Conn. – Connecticut’s Beardsley Zoo announced they have received a $3,475 grant from Fairfield University’s Center for Faith & Public Life to support the Zoo’s RIZE program, or Research, Internships and Zoo Education. RIZE was developed by Zoo staff members Jim Knox, education curator; Rob Tomas, associate curator; and Ashley Byun, Fairfield University associate professor of biology. The award recognizes the success and growth of the six-year-old partnership between Fairfield University and Connecticut’s Beardsley Zoo, and the ways in which it has enhanced student learning, contributed research to the field, and led to positive outcomes for the Zoo and the animal communities served. The grant was awarded at a ceremony for the Partnership for Social Change event at the University’s Kelley Center.

The partnership between the University and the Zoo began as a long-term Service Learning project for a lab course in Vertebrate Zoology (BI 318L), taught by Byun. From its beginnings as an opportunity to help students gain experience in an academic field while providing community service, it quickly became a bellwether behavioral studies program administered by Knox, Tomas and Byun. The program engages students in observing and documenting animal behavior. In their initial classroom training, students are shown how to collect and analyze data by developing an ethogram, a template for behaviors that can be observed. Behaviors include time spent climbing, swimming, foraging, interacting, and scent marking.

Now in its sixth year, the grant will allow RIZE to expand its boundaries beyond the single course, engage additional faculty and students from other disciplines, and promote the program as a nationally recognized Service Learning model for zoos and aquariums.

“Students contribute 400-450 hours of behavioral observation each semester,” explained Knox. “They receive extensive training before beginning to look for patterns in behavior that can help us further our mission of animal care and conservation.”

“What they observe allows us to make the best choices for animal welfare and contributes to enrichment and environmental management,” added Tomas.

“It was unusual to think of Service Learning as extending to the animal community when we began,” said Byun. “But community includes everything, because we share the world with animals. Like people, we have animals that have been excluded or marginalized by habitat loss.”

The Zoo is grateful to its many members, supporters, and corporate partners that help to educate, delight, and bring animal welfare and conservation to the state of Connecticut.

Ethology, or the study of animal behavior, helps us to understand the link between living organisms and the environment. Since behavior is how animals define their lives, including humans and our behavior, understanding animal behavior should be at the top of our priorities. Connecticut’s Beardsley Zoo continues to be quietly at the forefront of flagship programs like RIZE and behavioral research, along with a number of other community and student educational efforts. Learn more at www.beardsleyzoo.org.

About Connecticut’s Beardsley ZooSpend the day a world away at Connecticut's Beardsley Zoo! Connecticut's only zoo is celebrating its 96thanniversary this year. The Zoo features 300 animals representing primarily North and South American species. Guests won't want to miss our Amur (Siberian) tigers and tiger cubs, Amur leopards, maned wolf pups, Brazilian ocelot, Mexican wolves, and Golden Lion tamarins. Other highlights include our South American rainforest with free-flight aviary, the prairie dog exhibit with "pop-up" viewing areas, the New England Farmyard with goats, pigs, sheep, and other barnyard critters, plus the hoofstock trail featuring bison, pronghorn, deer, and more. Guests can grab a bite at the Peacock Café, eat in the Picnic Grove, and enjoy a ride on our colorful carousel. For more information, visit beardsleyzoo.org.