For New Research Directions, Look To the Kids 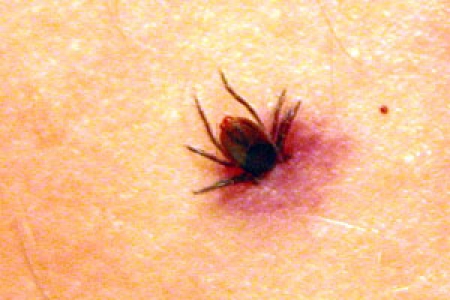 STAMFORD, CT—The next discovery that could change the world of Lyme disease may come from the inquiring mind of a high school or undergraduate college student.

In the last few years, a host of young students—perhaps the next generation of Lyme researchers—have managed to make valuable contributions to scientific knowledge about Lyme, the fastest-growing vector-borne disease in the nation.

"We're thrilled that young people are interested in Lyme research," says Diane Blanchard, co-president of Lyme Research Alliance (LRA), the nation's leading private non-profit funder of Lyme research at the university level. "They are unbridled in their thinking and open to all possibilities that might not have been tried before."

Among those who have unearthed new findings are Hannah Stewart, a Plainview Old-Bethpage (NY) High School student whose research under the auspices of Dr. Russell Burke, chair of the Biology Department at Hofstra University, found that both northern and southern black-legged ticks, if given the choice, preferred to feed off of lizards rather than mammal hosts such as mice. "We found that lizards are poor hosts for the Lyme disease bacteria," Burke said. "Down south, lizards don't pass on Lyme disease and this keeps the rate of the disease low."

The Brandeis University-bound Stewart showed that ticks only feed on mammals in the north when there are no lizards available. "Her work will help us move forward with our studies in our effort to understand the spread of this disease," said Dr. Burke.

Another teen who has had an impact in the Lyme community is Jacqueline Flynn, a 17-year old Braintree (MA) High School rising senior whose research two years ago on killing black legged ticks in clothes dryers attracted the interest of the U.S. Centers for Disease Control and Prevention. Although the federal agency recommended putting tick-infested clothing in a dryer for an hour, Flynn found that even five minutes on low heat could do the job.

And a Lyme disease early detection product is being tested thanks to the high school project of Temple Douglas who, four years ago, was a senior at Thomas Jefferson High School for Science and Technology in Alexandria, VA. Douglas's project caught the attention of researchers at George Mason University's Center for Applied Proteomics and Molecular Medicine.

Mason Assistant Professor Alessandra Luchini worked with Douglas, now a Princeton University senior, on the Lyme test which uses a urine sample to detect proteins deriving from the Lyme bacteria (the current Lyme diagnostic test uses a blood sample to detect patient's antibodies against the Lyme bacteria). Mason has partnered with Ceres Nanosciences in testing and developing a commercial product that could eventually be used in physicians' offices.

Connecticut teens have also been contributing to Lyme research. Ryan Kerr, then a sophomore at Danbury High School (he is now attending Harvard University) received top honors in 2011 at the Connecticut Science & Engineering Fair for his school science project showing that introducing microscopic roundworms (nematodes) into the soil could effectively decrease tick populations.

"Living in Connecticut, I know people who get bitten by ticks all the time," said Kerr, who also won two major awards at the Intel International Science and Engineering Fair in Los Angeles for his work. "Some get Lyme and some don't and I wondered why that was. I also wanted to know what we can do to decrease tick populations. Nematodes had been talked about in scientific literature, so I decided to do some research on this."

Kerr tested two different species of nematodes and while neither were effective in killing normal adult ticks, both killed engorged adult females which lay eggs. And although Kerr hasn't done further work on the project, he says there is a "potential for more Lyme research either next summer or over the winter."

"The work that kids are doing today is extremely creative," said Bob Wisner, director of the Connecticut Fair. "It's amazing and impressive at the same time."

Binghamton University Professor Ralph Garruto, Ph.D., whose large research group comprised of undergraduate and graduate students investigates the spread of Lyme and other tick-borne diseases in built environments across upstate New York and the Northeast, sums it up this way: "Science needs young people immersed in research. They are scientific risk takers at this stage and aren't afraid to make mistakes. They think out of the box and ask 'hey, why not this?'—bringing fresh points of view to research efforts."

All this, of course, is valued by LRA, an organization dedicated to finding a reliable and accessible diagnostic test and effective treatment for persistent Lyme. "Our researchers continue to push the boundaries of knowledge," said Debbie Siciliano, LRA's co-president. "The fact that students are taking part in the effort to put an end to this terrible disease only reinforces our belief that we will win the war against long-term Lyme."