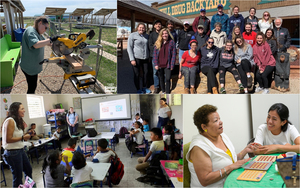 FAIRFIELD, Conn.—For many Sacred Heart University students, summer break hasn’t been about sleeping in and going to the beach. Rather, it has meant helping others and making connections with new people.

One student group worked with the Bridgeport-based nonprofit organization Simply Smiles, volunteering with the Lakota people at the Cheyenne River Sioux Tribe Reservation near La Plant, SD. Another group partnered with Guatemala university students to work on public health initiatives there and in Bridgeport.

“Taking students out of their comfort zones, showing them how different people live, learn and grow, gives them a better understanding of the world around them,” said Annie Wendel, assistant director of Volunteer Programs & Service Learning (VPSL). “These volunteering experiences can be life-changing.”

Fifteen students accompanied Karreem Mebane, director of VPSL; Gerald Reid, sociology professor; Ron Hamel, psychology professor; and Anthony Latina, men’s basketball coach, to South Dakota to work with Simply Smiles at the reservation for a week. The nonprofit has established a number of programs there to brighten the future for impoverished children and their families.

“Our goal was to assist Simply Smiles in providing children’s programs and to renovate the tribe’s community center,” said Reid, who had volunteered at the reservation once before.

Since the group arrived the week before the children’s summer vacation, the focus was on helping Simply Smiles get the center ready for summer camp. The SHU volunteers painted, worked in the greenhouse, cleared the grounds and prepared meals, among other tasks.

Simply Smiles also offered a two-hour program in the afternoons after school let out. At these sessions, the SHU group participated in several activities with the camp director, including a basketball clinic. That’s where Latina and his student-athletes helped the children hone their basketball skills, a sport that elicited much passion.

“It was awesome,” Latina said. “It was very humbling. Our guys really enjoyed it and got a lot out of it.” One goal for the trip was to ensure SHU’s basketball players had a great learning experience, Latina said. He reinforced the message that participating in the camp was not about them–it was about serving others and helping those who have less. “Basketball is very popular on the reservation,” Latina said. “We had a very engaged audience. I think the kids really enjoyed themselves.”

The experience was a great bonding opportunity for the players, who also spent time with other SHU students. This was beneficial, Latina said, because student-athletes often find themselves in their own little bubble, only mingling with other athletes.

Participating in this type of experience serves the University’s mission, Reid said. “It’s important because we’re addressing the real-life problems of youth on the reservation.” Simply Smiles is working to break a cycle of hopelessness for the Lakota youth, he said.

During the week, students also met with elders on the reservation, participated in discussions with professors about mental health, visited the local cultural center and shared reflections nightly on what they were seeing and hearing.

“It was a hugely positive experience,” Reid said. “The students worked really hard. They got to know a lot of people there.”

The trip was “absolutely life-changing” for junior Gabby Fezza, 19, of Northport, Long Island, who learned about the South Dakota mission during a SHU colloquium last winter. “The girls speaking about this trip were so emotionally connected to their experiences there, and I was greatly inspired from the moment I heard them,” said the English and philosophy major.

During her time on the reservation, Fezza said, she learned a lot about herself and the Lakota tribe’s culture. She picked up the children for summer camp each day at their homes. “Seeing where these children lived every day was one of the most difficult parts of the trip, because we saw how underdeveloped even their most populated areas were. Working with these kids was an absolutely unreal experience, as I got to see how special they are, yet everything in their lives is set up to ensure a prevention of success,” she said.

Students on the trip earned one credit elective toward their graduation.

Both groups took a culture and global health course during the spring semester, which included collaborative, online international learning to increase knowledge of cultural awareness and develop relationships. They worked together to conduct need assessments for their communities, write proposals and then implement them together in June. They spent a week immersed in each other’s communities.

Sacred Heart’s students and faculty traveled to San Antonio Aguas Calientes to meet their Guatemalan counterparts. There, said senior Erin Rederscheid, 21, the six SHU students and 10 Guatemalan students conducted a health fair to educate the public about healthy habits. They also provided health assessments, which included taking blood pressure and determining body mass index. In addition, the group spent a day planting more than 200 trees with a local school and dedicated another day to teaching children from kindergarten through sixth grade about healthy lifestyles and disease prevention.

“This was a long time in the making,” said Rederscheid, a health science major from Long Island. “We were very excited to meet each other.” Because the groups had been working together in the classroom for so long, they appreciated meeting in person and starting the work they had discussed for so long.

After the week in Guatemala, they came to SHU to help the Hall Neighborhood House and the Green Village Initiative, both nonprofits working to better Bridgeport residents’ lives.

One afternoon at Hall Neighborhood House, the group spent time working with children and senior citizens, playing bingo with the latter and getting to know them.

“Students from both universities were really fantastic,” said Robin Danzak, associate professor of speech-language pathology. “Everyone was great, and they really committed to giving back to their communities.”

While the students came from different backgrounds and there were language barriers, everyone was passionate about improving their surroundings, Danzak said. “Everyone feels grateful to have had this opportunity. It’s been really inspiring.”

At the end of each day during the two weeks, students shared their thoughts and reflections. They broke down stereotypes and learned from each other, said Danzak, who hopes the University can continue the program.

Carolina Valenzuela, a nurse and nursing student at URL, said through a translator that the experience was truly special, and she was putting everything she learned into practice. “All the barriers we had in mind have broken down,” she said. “Sacred Heart has opened a door for us, and we’re trying to absorb as much as we can. It’s amazing being here; we learned so much.”

At the Green Village Initiative—a community garden that empowers people to grow their own food, learn leadership and develop friendships—the groups helped weed, plant and create a sign to improve the garden’s curb appeal.

They also toured SHU, as many of the Guatemalan students had never seen an American university or even been to the United States before. They toured the United Nations in New York City and visited the Discovery Museum Adventure Park in Bridgeport. The week ended with a celebratory dinner.