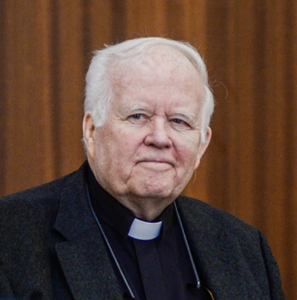 FAIRFIELD, Conn.—The late Father William “Bill” Sangiovanni, who was known for his missionary and volunteer work, inspired Jim Browning to create a scholarship with unique characteristics in memory of his brother Scott. It’s only fitting that this year’s awards will be in memory of Sangiovanni.

Browning started a scholarship foundation in 1987 in memory of his brother, Scott Browning, who had died suddenly. The financial assistance aids local students who experience hardship that suppresses their dreams of a college education. While the scholarship has been assisting students at SHU and the University of Bridgeport for 32 years, Browning explained that the gratification of the scholarship goes farther than a simple memorial of his brother.

“In the first couple years, until I had the chance to meet some of the beneficiaries, I never realized the hardship that so many had in going to school,” said Browning. He noted that, while helping students financially is important, meeting them and sharing their stories is what makes the scholarship special—a life lesson he learned from Sangiovanni many years before.

This year’s scholarships were awarded in memory of Sangiovanni, who died in February at age 77. Sangiovanni—or Father Bill, as he was commonly called—was best known for his service in the Diocese of Bridgeport, where he was director of chaplains at Sacred Heart University and then principal, and later president, of Notre Dame High School of Fairfield.

The relationship between Sangiovanni and Browning dates back to when Browning attended Central High School in Bridgeport. “Father Bill used to come to our football games. He used to come with a bugle and play it in the stands. He was our number one fan. It was pretty cool,” Browning said.

Sangiovanni performed the wedding ceremony for Browning and his wife Sue, delivered the mass at Scott Browning’s funeral and led weekly masses at Sacred Heart that Browning and his family often attended. “When I think about my relationship with Sangiovanni, he was an inspiration to me well before my brother Scott passed away,” he said.

Browning said Sangiovanni taught him that, while donating is important, seeing the impact of the donations goes much farther. “Always around Thanksgiving, he was part of a program that delivered food to people who couldn’t afford it. I always made sure I donated, but he said to me, ‘Thank you for writing a check, but just so you know, that’s the easy part. Why don’t you come with us to deliver it sometime?’ I did one year. It was amazing when I met the people—seeing the impact and gratitude. When you’re writing a check, you’re missing a part of the impact. He taught me there is more than just donating money.”

More than $800,000 has been raised for the scholarship, which has been awarded to 47 Sacred Heart University students, not including this year’s recipients, and another 16 at the University of Bridgeport. This year’s recipients are William Mastroni ’20, Olivia Okoroafor ’21, Kadijah Needham ’23 and a fourth who will be announced at a later date. The recipients each have a deep-rooted connection to Sacred Heart University, and this scholarship enables them to pursue the education they wanted, regardless of circumstance.

“For me, it is only right to honor Father Bill’s legacy and tradition with this special award for the students. His inspiration drove me to many of the aspects of the scholarship today.”

As the second-largest independent Catholic university in New England, and one of the fastest-growing in the U.S., Sacred Heart University is a national leader in shaping higher education for the 21st century. SHU offers more than 80 undergraduate, graduate, doctoral and certificate programs on its Fairfield, Conn., campus. Sacred Heart also has satellites in Connecticut, Luxembourg and Ireland and offers online programs. More than 9,000 students attend the University’s eight colleges and schools: Arts & Sciences; Communication, Media & the Arts; Computer Science & Engineering; Health Professions; the Isabelle Farrington College of Education; the Jack Welch College of Business & Technology; Nursing; and St. Vincent’s College. Sacred Heart stands out from other Catholic institutions as it was established and led by laity. The contemporary Catholic university is rooted in the rich Catholic intellectual tradition and the liberal arts, and at the same time cultivates students to be forward thinkers who enact change—in their own lives, professions and in their communities. The Princeton Review includes SHU in its Best 385 Colleges–2020 Edition, “Best in the Northeast” and Best 267 Business Schools–2018 Edition. Sacred Heart has a Division I athletics program and an impressive performing arts program that includes choir, band, dance and theater. www.sacredheart.edu