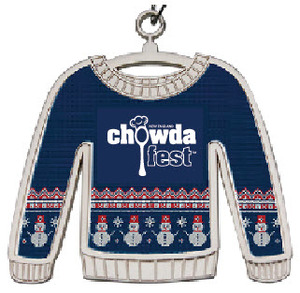 Norwalk, CT – “Maybe it’s the holidays but we’re very excited about this promotion,” said Jim Keenan, executive director who puts on both Chowdafest and The Great Mac & Chili Challenge. “It started with creating a Chowdafest ornament that’s patterned after a very cool ugly sweater and then realizing there’s a fun crossover audience that likes both of these events,” he added.

This is the first year that Chowdafest has ever created an ornament which was originally just to be mailed as a “thank you” to sponsors at the end of the year. However, these colorful ornaments, made from pewter, were such a surprise hit among fellow Chowdafest enthusiasts that they decided to offer a limited number if people purchased a pair of general admission tickets to their Great Mac & Chili event on Jan. 26, 2020 at the recently announced SoNo Collection location in Norwalk.

“The tickets are a great gift to put under the tree and the ornament is great to put on it,” Keenan said. Tickets to the Mac & Chili competition are only available on line at www.MacAndChili.com and are still just $20. People who order online before 12/16 or while supplies last will receive one of these ornaments that are sure to become a collector’s item.

The Great Mac & Chili Challenge will once again feature unlimited sampling of both chili and mac & cheese from some of the area’s best chefs and restaurants. “The new winter date and location is sure to be a hit as comfort food is in full season and The SoNo Collection is simply spectacular,” added Keenan. “No doubt both Mac ‘N Cheese and Chili lovers from the tri-state area won’t want to miss it."

The competition will benefit Food Rescue US in the ongoing fight against food insecurity. The Great Mac & Chili Challenge is sponsored by Cabot’s Cooperative, City Carting, Polar