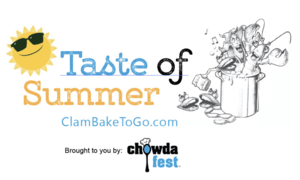 Norwalk, Conn – The folks at Chowdafest are doing something novel for their fans during these pandemic times with a “ClamBake To Go” for this Father's Day on June 21, 2020. “Given that so many parks, beaches and summer activities are either canceled or significantly curtailed, we wanted to give people a taste of summer with a clam bake all in one pot which you can easily cook at home either on your grill or stove,” said Jim Keenan, Chief Experience Officer for Chowdafest. Each dinner includes a hefty 1.5 lb whole lobster, clams, mussels, sausage, potatoes and corn on the cob while costing just $42 for each meal and comes in just one pot which customers get to keep.

“We thought this would make an ideal gift to give on Father's Day. It's so much better than a tie,” Keenan jokingly said, a proud father himself.  They're easy to cook and only takes between 20 and 40 minutes to steam depending on how many meals that are in your pot. The pot sizes vary only in height and can hold up to ten meals but the diameter of the pot remains the same so it easily fits on your stove or grill. All you do is just add water, beer or wine and let them steam to perfection. Owner/Chef Jay LeBlanc of Knot Norm's in East Norwalk is renown for his lobster rolls and is partial to clambakes when steamed with a good beer. He will be filming social media spots on how to grill your clambake with beer along with friend Tony Aitoro of Aitoro's appliance in Norwalk who is known as a grill master.

These fun “clam bakes on the go” are limited as you have between now and June 19th at 11pm to order them online while supplies last. Once ordered, pick up is on Father's Day from Noon to 4:00 pm and can be picked up at the Westport Hub and CCO Habitats, both located at 50 Charles Street in Westport, convenient to the train station and right off exit 16 off I-95. This makes its very accessible for not only for Chowdafest fans who live in Westport but for all of them who live between Greenwich and Fairfield.

Keenan amusingly calls this meal pick-up “a curbside clambake” but he's taking current concerns seriously as his staff will be wearing masks and gloves while bringing the dinners out to the customers cars. The process is quick and easy as people can only order online at www.ClamBakeToGo.com. Customers are then asked to print out their ticket and tape it on the inside of their windshield so their order can be quickly scanned and their order delivered to their car. No need to park or get out of your car. This keeps the line moving so everyone can get home to begin cooking their clambake. The meals are packed in ice to keep cold until you cook them.

“With the summer season tentatively on standby, we wanted to make sure everyone can survive until our annual fall event,” Keenan said. “Plus thanks to  both The Westport Hub and CCO Habitats, we're able to hold our pick-ups in Westport while supporting some of our local restaurants and sponsors, all of which are very much part of summer." For example, Polar Beverages will be wishing a happy fathers day with a complimentary can of their summertime seltzer with each meal. Cabot Creamery knows that both lobster and clams go great with their melted butter and they too will be participating with a complimentary stick of their butter. Both are long time and treasured sponsors of Chowdafest.

Samuel Adams is a new sponsor of Chowdafest this year, offering a complimentary two-pack with each clambake while supplies last and assuming the person picking them up is over the age of 21 with ID. The ideal pairing for this clambake is to cook with one and raise the other one to toast your Dad on the occasion.

“The goodies don't stop there,” said Tony Aitoro of Aitoro's Appliances. A shellfish tool to use with your lobster along with a lobster bib will be compliments of Aitoro's. All goodies are while supplies last. “We didn't forget the wet naps,” Tony laughed. “Grilling is such a Father's Day tradition and these clambakes to go work great on a grill,” he added.

Clambake meals all include one lobster each but the number of meals are limited so best order early. There will be no walk up sales. Even pickup times are limited so best to go online to order the pick up time that works best for you. Keenan notes that a touchless delivery service is also available but limited to Fairfield, Westport, Weston, Wilton, Norwalk and New Canaan for a flat fee of $8.

For additional information about this Taste of Summer by Chowdafest, please visit  www.ClamBakeToGo.com or visit www.Chowdafest.org.