Doing Business Well in the Time of COVID-19: Lessons from The US Navy During World War II 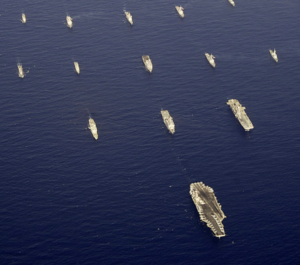 COVID-19 has given the public a re-appreciation of leaders and organizations pushing through previously unimagined challenges to continue to advance their business, protect employees, and improve their service to customers.  During World War II, a little-known naval battle between the Imperial Japanese and the United States off the island of Samar in the Philippines serves as an unlikely example of determination and innovation for organizations seeking to do business well during COVID-19.

The naval battle of Samar, the Philippines, occurred on October 25, 1944.  The battle was between an inferior United States force of small ships pitted against the superior, main battle line destroyers and battleships of Imperial Japan.  The Japanese fleet out-numbered, out-gunned, out-armored, and out-manned the US Navy.  Yet, over hours of ferocious fighting, the US Navy battled their small ships incredibly well and the engagement concluded in a draw, a virtual military impossibility.  The intensity and fury of the US Navy’s defense against the attacking Japanese convinced the Japanese to withdraw instead of attacking vulnerable American troop ships poised to invade the Philippines.

This battle, one of the last “traditional” ship-to-ship battles of World War II, demonstrated what a trained, well led, and motivated naval force could achieve under utterly impossible conditions.  The business lessons from the Battle off Samar apply in multiple ways for businesses and organizations today in the world of COVID-19.

Adapt Your Actions to Succeed When the Chips Are Down.  The mission of the small US Navy ships was to protect a fleet of aircraft carriers that were supporting the US invasion of the Philippines.  The Japanese intended to attack the aircraft carriers as their first objective in their campaign to stop the American invasion.  The US Navy ships were surprised by the size and intensity of the Japanese attack from the very start of the naval battle.  What eventually saved the day was that the American sailors were well trained in both their primary duties and to assume the duties of others.  The elevated level of training and job adaptation was a critical element in the ability of the US Navy to withstand the deadly Japanese attacks.  The training of the crews to rapidly adapt to changes was essential.

Adopt New Technology for The Most Important Systems.  The attacking Japanese ships relied on visual direction systems to fire their largest guns.  The Americans had developed, tested, and improved the use of radar detection and tracking gun systems that allowed them higher accuracy and higher rates of fire.  During the battle, the US Navy ships immediately started making smoke to make it harder for the Japanese to find the correct range for their guns.  In a combination of technology and training, one of the American ships was able to fire 325, 5” shells in 35 minutes at the larger Japanese ships with high on target accuracy.  The American adaptation of “new” technology into gunnery systems was a crucial advantage that allowed the smaller American warships to hold off the Japanese.

Be Prepared to Redefine Your Vision of Victory.  In late 1944, the US Navy was becoming used to seeing itself as the “always” victorious force in sea battles against Japan.  The speed, intensity, professionalism, strength, and surprise of the Japanese attack quickly made the defending US Navy adapt their attitude from victory to survival.  US Navy leadership, technology, and training made the US Navy quickly adapt to a defensive position and strike hard against the attacking Japanese.  This ability to redefine their objectives from success to survival was a critical leadership element that allowed the US Navy to fight to a draw.

Expect the Enemy to Do the Unexpected Very Well.  The US Navy was initially surprised at the speed, coordination, size, and surprise of the large Japanese force.  At this stage in World War II, the Japanese Navy had become increasingly challenged to execute large, coordinated naval attacks.  This failure was a critical lapse for the US Navy to underestimate a seasoned, well trained, and determined foe.  Business always needs to respect, anticipate, war game, and plan to expect the absolute best from their opponents and to expect the opposition will do the unexpected very well.

Great Leadership Attacks Despite Danger & Uncertainty.  The attacking Japanese were surprised as the small US ships turned to attack them.  The smaller US ships displaced 1,800 tons against the largest Japanese ship, the Yamato, which displaced 72,000 tons – a military equivalent of a toddler fighting Mike Tyson.  The US Navy leaders knew that there was no running away from this great enemy fleet, the danger was coming no matter what.  The Navy leaders also knew that if they ran, there would never be a chance to win.  Instead, they chose to attack into great danger.  At the end of the day, by not allowing the Japanese to win, the US Navy was able to create a hard-fought draw.

The Battle of Samar in during World War II is a lesson from the US Navy for all organizational leaders of how to adapt and “fight” their organizations through the challenges of COVID-19.  High levels of individual training, the instrumental adaptation of new technology, junior leaders that took initiative to assume higher responsibility, and the ability to respect but still aggressively fight a dangerous enemy were all keys from the US Navy in World War II that apply equally today against COVID-19.

Chad Storlie is a retired US Army Special Forces officer, an Iraq combat veteran, and has 15 years university teaching experience as an adjunct Professor of Marketing.  He is a mid-level B2B marketing executive and a widely published author on customer experience, leadership, marketing, business, analytics, decision making, military and technology topics.