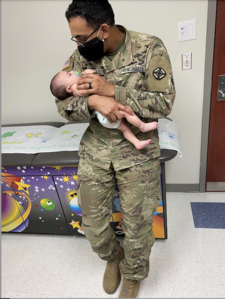 ROCKY HILL, CT – They’ve served and sacrificed for our country yet nearly one quarter — 23% — of Connecticut’s 146,634 veterans struggle to afford the basics, according to a new report from Connecticut United Ways and their research partner United For ALICE.

In 2019, while 5% of the state’s veterans were deemed in poverty, 18% — more than three times as many — were ALICE (Asset Limited, Income Constrained, Employed). ALICE households earn more than the Federal Poverty Level but less than what it costs to live and work in the modern economy. Combined, 23% of Connecticut’s veterans were below the ALICE Threshold of Financial Survival, with income that doesn’t meet the basic costs of housing, childcare, health care, transportation and a smartphone plan.

“Our freedom comes with the responsibility to ensure that those who have served and sacrificed don’t struggle to make ends meet once they return home,” said United Way of Connecticut’s President and CEO Lisa Tepper Bates. “Although veterans do have additional supports not afforded nonveterans, there’s room for improvement.”

Roberto Gonzalez is 25 years old and proudly half Dominican and half Ecuadorian. After graduating from high school in his hometown of Bridgeport, he quickly realized that he was not quite ready for college and enlisted in the U.S. Army. He spent four active years in Oklahoma working on the cannon crew and as a field artillery member. While on active duty he married his wife Julia and became a father to his first child.

Roberto’s job required a lot of tedious work and heavy lifting and didn’t lend itself to transitioning to a “real-world” job. The onset of the pandemic affected his ability to explore new positions within the Army and made raising his son in isolation very difficult. He shares that “one of the biggest lessons I learned was being able to appreciate my family. It was my first time being away from home and that gave me the opportunity to mature and grow as a person.” But once his contract expired, Roberto was ready to return to Connecticut.

But the high cost of housing in Connecticut challenges veterans who rent and who own homes. The ALICE In Focus: Veterans Research Brief reports that 50% of Connecticut’s veterans are homeowners earning below the ALICE Threshold and spending more than 35% of their income on a mortgage, utilities, tax and insurance. The nearly 30,000 Connecticut Veterans who rent had considerably higher rates of financial hardship (47% below the Threshold) than veterans who lived in owner-occupied housing (17%).

Anticipating the difficulty of being able to find affordable housing, before Roberto and his family returned home, they reached out to Middlesex Habitat for Humanity of CT, Inc. and applied to their Veterans Build program - a program that works to provide homeownership opportunities to current military and veterans of all service branches. The program partners with homeowners who are service members working to build a better life for their families. Roberto’s family lived with Julia’s parents in Naugatuck while they completed their 350 hours of sweat equity on their new home in Middlefield. The Gonzalez family gratefully moved into their new home in May of this year.

Roberto is a full-time student at UConn Waterbury, exploring the fields of Information Technology, Computer Engineering and Finance. He also raises his children and takes care of them while Julia is at work and studies respiratory therapy full-time. Roberto’s GI benefits help pay his school expenses and provide a basic housing allowance. He also receives disability benefits for the toll his job took on his body and his mental health. And like some veterans, Roberto and his family participate in as much public assistance as possible, like WIC and SNAP. Five percent of Connecticut’s financially insecure veterans received Supplementary Security Income (SSI) and 17% participated in the Supplemental Nutrition Assistance Program (SNAP).

Roberto shares that it’s “important to have a plan, whether you stay in active duty or get out. We had a pretty decent plan – we have a house, go to school and raise our kids with lots of love and appreciation. The end game far outweighs all the stuff I’ve ever been through.” And because he wasn’t able to completely give up on his dream of serving in the military, Roberto is currently enlisted in the National Guard, and is being re-classed as an IT Specialist to better align with his interests.

The ALICE In Focus: Veterans report highlights some lessons to be learned, said United For ALICE National Director Stephanie Hoopes, Ph.D. Like Roberto, Connecticut’s veterans are slightly better off than nonveterans - with 23% struggling to make ends meet compared to 29% of adults who never served.

“Veterans have higher rates of full-time employment, are more likely to be homeowners and have more comprehensive health insurance coverage and disability benefits,” Hoopes said. “This suggests that the supports afforded veterans are making a difference and could provide invaluable insights for developing strategies that help nonveterans facing financial hardship.”

Other findings from ALICE in Focus: Veterans include:

Resources available for veterans can be confusing at times. For help navigating these many resources, call 2-1-1- or visit ct211.org.  Please also call 2-1-1 for help enrolling in public assistance programs, like SSI and SNAP.

About United Way of Connecticut

United Way of Connecticut serves by 1) connecting people to information, education, and services; 2) supporting early childhood development and education; 3) responding to emergencies, whether they are personal/family crises or community-wide disasters; and 4) promoting strong communities in collaboration with many government and nonprofit partners. These four objectives are carried out by means of our diverse array of services which creates cross-cutting connections that help to integrate the work of multiple government and nonprofit agencies.

About United For ALICE

United For ALICE is a driver of innovation, research and action to improve life across the country for ALICE (Asset Limited, Income Constrained, Employed) and for all. Through the development of the ALICE measurements, a comprehensive, unbiased picture of financial hardship has emerged. Harnessing this data and research on the mismatch between low-paying jobs and the cost of survival, ALICE partners convene, advocate and collaborate on solutions that promote financial stability at local, state and national levels. This grassroots ALICE movement, led by United Way of Northern New Jersey, has spread to 24 states and includes United Ways, corporations, nonprofits and foundations in Arkansas, Connecticut, Delaware, Florida, Hawai‘i, Idaho, Illinois, Indiana, Iowa, Louisiana, Maryland, Michigan, Mississippi, New Jersey, New York, Ohio, Oregon, Pennsylvania, Tennessee, Texas, Virginia, Washington, Washington, D.C., West Virginia and Wisconsin; we are United For ALICE. For more information, visit: UnitedForALICE.org.