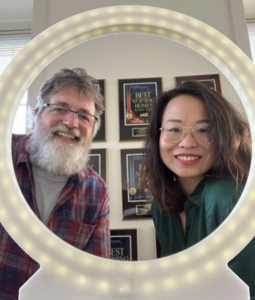 Recent discoveries by neuroscientists have found that brain rhythms supporting memory and cognition are disrupted in people with Alzheimer’s. Growing evidence indicates that stimulating these brain waves at the right frequencies can improve memory and cognition and even decrease amyloid plaques and tau tangles in the brain.

Dr. David Gentner, President of the Institute for Music and Neurologic Function, with the support of its Executive Director, Concetta Tomaino, volunteered to participate in a user-experience research trial with the most recent Oscillo Biosciences prototype device. Dr. Gentner said, “Unlike pharmaceuticals, the use of music has no cost and no side effects and I have always been interested in its use, but this study adds rhythmic light; it is beyond fascinating, and I am thrilled to be able to participate.”

According to Oscillo Biosciences, neuroscience researchers have observed disruptions in rhythmic brain activity in patients with dementia. Disruptions in brain activity in the Gamma-frequency range have been observed before the onset of cognitive impairment and before the formation of plaque deposits associated with Alzheimer’s disease. Oscillo Biosciences’s cloud-based technology platform synchronizes light with music to produce a synergistic effect capable of reaching parts of the brain that cannot be reached by music or light alone.

Dr. Gentner says, “People working in senior care and service environments know the power of music, as it is offered generally as part of a therapeutic environment in nursing homes, assisted living facilities, and adult daycare centers. Music is based on cultural experiences, it appeals to diverse groups of people regardless of language, economics, religion, or education. Music is emotional and is associated with numerous life events, including religious gatherings, social occasions, concerts, graduations, weddings.

Xiyu Zhang, an Institute for Music and Neurologic Function Music therapist and Oscillo Biosciences research study assistant said, “Alzheimer’s patients lose their connections with their family and friends, their surroundings, and eventually, themselves. Yet their musical connections can remain intact. As a music therapist, I work with patients struggling with Alzheimer’s, so it is nice to be able to assist in the research to prevent or delay the disease.”

Oscillo Founder and Chief Science Officer, Dr. Edward Large, a leading advocate for treating neurological disease, points out that despite $42.5 billion spent on research since 1995, we still do not have a cure for Alzheimer’s disease. “This disease is growing at an alarming rate, and time is of the essence. We scientists need to look at new ways to treat the problem. Digital therapeutics such as ours are a growing category recognized by the FDA. Our treatment is showing very encouraging results, and we’re excited that it is non-invasive, drug-free, well-tolerated, and even enjoyable for patients to use.”

If we can restore normal rhythmic activity throughout the brain, including rhythms in the Gamma band, we should be able to delay and even reverse the onset of dementia-related disorders like Alzheimer’s. Neuroscience researchers know that we can stimulate brain rhythms auditorily (using sound) and visually (using light). Oscillo Biosciences marries the power of music with a rhythmic visual experience to activate different areas of the brain at multiple frequencies, especially those involved in memory and cognition.

In the United States, without a means of prevention or a cure, this disease will contribute cumulative costs of almost $20 trillion to Medicare and Medicaid spending by 2050. Statistically, the incidence of dementia doubles with every 6.3-year incremental increase in age.

David J. Gentner, Ed.D. is President of the Institute for Music and Neurologic Function and also serves as the 10th President of Wartburg and Wartburg Foundation, located in Mount Vernon, NY.