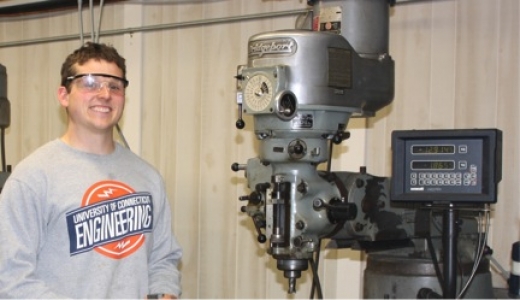 Hurco Machine Company put out the first-ever Chipmaker Challenge Championship to all manufacturing entrepreneurs in an effort to promote manufacturing efforts in the United States. Wade Moore, a 23-year old Connecticut native, won the first round of the contest. The prize is either a CNC Hurco Mill or Lathe which will be awarded on September 9th in Chicago at the International Machine Tool Show known as IMTS. Wade, one of seven finalists, will compete at the show in an event loosely styled after the show Shark Tank.

Wade, who recently graduated from UCONN with a mechanical engineering degree, comes from a great lineage of manufacturing entrepreneurs. His great-grandfather founded Moore Special Tool Company in Bridgeport in 1924. His grandfather, Wayne Moore, 83, a Trumbull resident, wrote the book “Foundations of Mechanical Accuracy” which is treasured in the manufacturing world. “I am so fortunate to have people passionate about manufacturing in my family. I know how important it is for our national security and economy to keep manufacturing strong in America. I am proud to be a finalist in the Hurco Chipmaker Challenge because I get to inspire others to embark in manufacturing enterprises.”

Wade recently won a patent with another friend for a skateboard splash-guard invention. “My first plastic prototype was manufactured with the 3D printer at his local library," he said.

Connecticut is also trying hard to keep the manufacturing edge in Connecticut as community colleges like Housatonic Community College have invested in machinery and programs to offer the Manufacturing Certificate. Wade’s brother, Hayes, 17, is a teaching intern at the school after receiving his certificate and working on an advanced degree as a Manufacturing Engineer.

Wade employs his three brothers in his business. Hayes is strong with his chip making skills and his computer-aided design abilities. Wade is awaiting his brother Russell, 20, who will be finishing his army service next year. ”When Russell finishes his service to our country, he knows that he will be a part of our team and I look forward to having him on board with all his army skills and discipline.”

Wade’s youngest brother, Colton, 14, is a student at the new Fairchild Wheeler Magnet School in Bridgeport in the Aerospace program. Colton is studying engineering there and is a top student who won second and third place at the science fair at his school and district last year. “Colton is a skilled mechanic who rebuilds dirt bikes and quads, and he is currently working on building a hydrogen internal combustion car which will run on water. His talent is well beyond his years.”

Wade’s business is in Milford, CT where he leases space with his former scoutmaster whom he earned his Eagle Scout rank in Boy Scouts.

Wade is looking forward to the chance of winning the Hurco mill, which will be a great step up in his business of contract machining and developing his own products. “I am appreciative of Hurco for being so kind and generous in helping the budding entrepreneurs of America," he said.