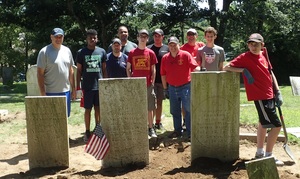 Fairfield, CT - Troop 90, Scouts of America, of Greenfield Hill in Fairfield CT, has announced the latest Scout, Henry Durham, to achieve the rank of Eagle Scout.

Troop 90 has been a chartered Troop of Scouts of America since 1938 and counts over 100 of its Scouts having achieved the rank of Eagle. The Troop is sponsored by Greenfield Hill Congregational Church and is part of the Pomperaug District, Connecticut Yankee Council.

Fewer than six percent of Scouts achieve the rank of Eagle, Scouting's highest rank. Henry's Scouting journey began with Cub Scout Pack 401, from which he crossed over to Troop 90 in 2011. After learning the basics of Scouting, including outdoor skills, first aid and citizenship, he joined the Order of the Arrow, Scouting's brotherhood of leadership and service, serving as Troop 90's representative to the OA Lodge and the Council in Milford. He also served as Quartermaster and a member of the Troop's senior patrol.

Henry's Scouting career culminated in his Eagle Scout service project, a community service project in which the Eagle candidate must demonstrate planning, leadership and the ability to manage a substantial effort. Henry's project was inspired by Rev. David Rowe of Greenfield Hill Congregational Church, and Jeff Taylor, a Greenfield Hill resident, who leads a multi-year effort to restore the Greenfield Hill Cemetery on Bronson Rd.

With the help of Troop 90 Scouts, relatives and neighbors, Henry restored a row of stones ranging from pre-American Revolution to the mid 19th century. The process involved removing the stones and resetting them in the ground, pouring new bases for some, and repairing those that had broken. The entire project spanned nearly three months.

"I chose this project because of the connection to our church and community, and Troop 90 is a part of both. Two of the original residents of my home in Fairfield, both Revolutionary War veterans, are buried there," Henry remarked. "I hope it inspires other Troop 90 Scouts to participate in this effort to keep part of our history alive for the future."

Henry and Troop 90 will celebrate his achievement with an Eagle Court of Honor later this year. Families interested in joining Boy Scouts can follow Troop 90 on Facebook and the web or contact our Scoutmaster This email address is being protected from spambots. You need JavaScript enabled to view it. .

Boy Scout Troop 90, sponsored by Greenfield Hill Congregational Church in Fairfield, Connecticut, is a leadership troop in The Connecticut Yankee Council, Pomperaug District. Troop 90 was founded in 1938. Since 1953, the Troop has produced over 100 Eagle Scouts, with an average of four new Eagle Scouts each year from 2007-2018. Troop 90 can be found on Facebook (http://www.facebook.com/troop90ct) and the web (http://www.troop90ct.org). You can contact Scoutmaster Drew Hiltz at This email address is being protected from spambots. You need JavaScript enabled to view it. .