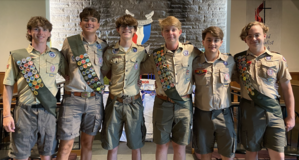 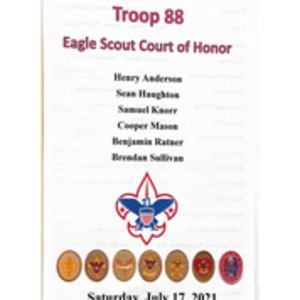 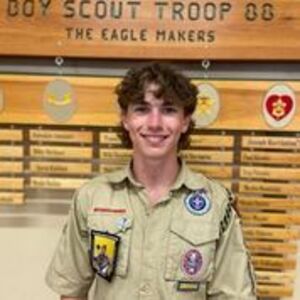 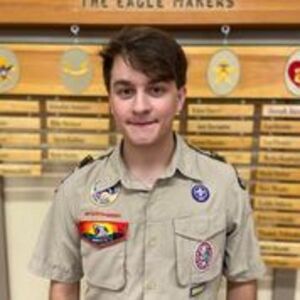 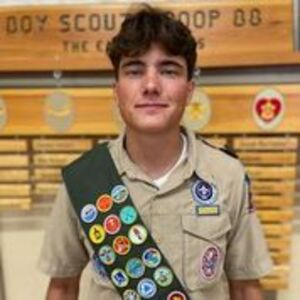 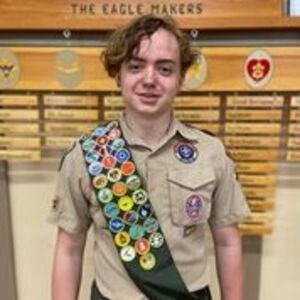 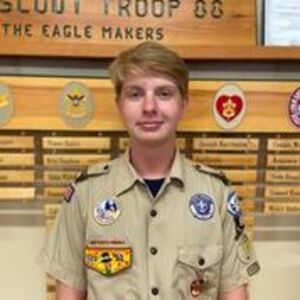 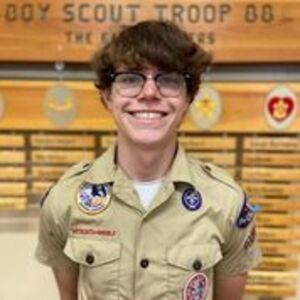 Below are details about the projects for which each of the Eagle Scout were recognized:

In 2018-2019, there were multiple articles in the media on the EEE disease and how mosquitoes carry and transmit it to people and pregnant women's unborn babies. Henry wanted to know how he could help. It was then that Henry decided to build bat houses for his Eagle project as bats can eat up to 8,000 mosquitos per night. Henry worked with the Fairfield Parks & Recreation Department and the Conservation Department at their workshop. He navigated evolving Covid-19 restrictions to organize teams to build prototypes, build, paint and install bat houses on poles 20 feet high across public areas throughout Fairfield.

Sean Haughton Eagle Project:
Sean worked with Aspetuck Land Trust to replace an old trail with a longer one that follows the slope of the hill so that less soil is likely to erode away the natural landscape. Over a weekend, the scouts were divided into two teams - one to clear the new trail and the other to create a trail break through a large rock wall. When all work was completed, a new 1500 foot trail was blazed, the old trail was closed off restoring it to its natural setting and preventing further damage to the ecosystem.
Samuel Knorr Eagle Project:
Hearing the wishes of young Fairfield families, Sammy worked with the FairfieldParks and Recreation Department and the Fairfield Department of Public Works for his Eagle Scout Project and designed, built and placed a beach toy exchange hut on Jennings and Penfield Beach to allow families visiting the beach to "take a toy, leave a toy." He raised funds for the materials and assembled the huts with the help of friends and fellow scouts at his home from where they were transported and installed at the beach.
Cooper Mason Eagle Project:
Cooper contacted PAWS in Norwalk and he learned there was a need for insulated shelters for feral cat colonies. He researched how to build a shelter and collected supplies from the shelter and local hardware stores. He built several shelters with the help of family members during quarantine which he then delivered to the shelter for use in feral cat colonies in Fairfield County. In addition, he created a how-to video with step by step instructions on how to build an insulated cat shelter which is now available on YouTube.
Benjamin Ratner Eagle Project:
For Ben’s Eagle Scout Project he built a 4’ wide by 14’ long wooden bridge for Aspetuck Land Trust’s Jump Brook preserve. The bridge, located about 1 mile in from Route 58, replaced a series of rotten planks used to traverse a wetlands section of the trail. This bridge gives safe passage to hikers and mountain bikers while protecting the surrounding vernal pools and their inhabitants.
Brendan Sullivan Eagle Project:
Brendan’s Eagle Project was building a prayer garden for Our Lady of Assumption Parish. This prayer garden included a Celtic cross gravel path with a rose garden in the center. Brendan has been very involved with his church throughout his life and knew that they were in need of a space outside to meet for prayer. That is why Brendan chose to build a space for worshippers to gather.
PHOTOS by Jeffrey Vilenski: The six honored scouts, Henry Anderson, Sean Haughton, Samuel Knorr, Cooper Mason, Benjamin Ratner, and Brendan Sullivan.