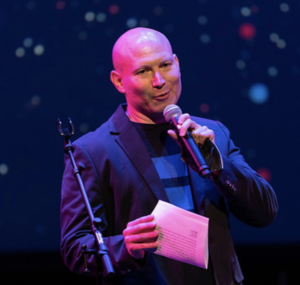 FAIRFIELD, Conn.—He plays various instruments and writes and produces music. He has worked with artists such as Stevie Wonder, John Legend and Alicia Keys. He has played at venues like Carnegie Hall and the Apollo Theater in New York City. Recently he recorded all the music for the Macy’s Thanksgiving Day Parade, a job he has had for several years.

The 46-year-old Fairfield native and resident started working at the theatre a few months ago. He is thrilled to bring his vision, as well as world-class acts, educational opportunities and films, to the downtown-Fairfield establishment—a venue he frequented as a child.

While he is busy operating the theatre, he spent two days away to prerecord the music for the Macy’s Thanksgiving Day parade. “I’ve been doing this since 2017,” he said. “I’m part of the core music team for the parade.”

During those two days, Oestreicher and a group of producers and musicians spent hours in a recording studio. They collaborated with a number of musicians—from Broadway acts to pop singers and seasoned vocalists. The performers came in and out of the studio, sometimes with music prepared and sometimes not. For those who didn’t bring music, Oestreicher and his team put something together on the spot. The team was led by the ABC’s Dancing with the Starsmusic director, Ray Chew.

“It’s a really high-pressure situation,” Oestreicher said. “The pieces will be heard by millions on parade day.”

This experience, among others, helps Oestreicher in his new SHU role. He works quickly and efficiently and greets every challenge as an opportunity. He looks forward to bringing groups he has worked with in previous positions to the theatre so the Fairfield community can experience them. He said he can’t wait for the theatre—a dynamic, professional venue—to play a role in the lives of SHU students and the greater community.

Growing up with music

Oestreicher started taking guitar and piano lessons at an early age. He played in bands with friends and, during high school, he started taking his talents to clubs and music halls. At the Connecticut All State music awards, he came in first place for piano and second place for guitar.

“I was really lucky I had parents who nurtured me throughout my musical endeavors,” Oestreicher said. He recalled going with them to see Broadway shows, exposing Oestreicher and his siblings to the power of art and its ability to unite people. “It’s what life is about … art provides you with this connection to the wider world,” he said.

While Oestreicher’s parents helped him appreciate art and all its forms, they still wanted him to get a college education and have something to fall back on in case his music career didn’t pan out. He earned a bachelor’s degree in philosophy at Tufts University in Medford, MA, and a bachelor’s in music from the New England Conservatory of Music in Boston, MA. After college, he was deeply engrossed in eastern Chinese philosophy and immersed himself in meditation and yoga for four years.

“I really focused on finding a deeper understanding and meaning of life,” Oestreicher said.

Eventually, he moved on to a slightly more traditional way of life with his first musical gig, playing on cruise ships. “It was a great way to travel and see the world,” he said.

After that stint, he moved back to Fairfield to be with family. He began playing at local venues and making connections with up-and-coming bands. Oestreicher eventually joined the band Chester French that was signed to the Interscope label. They traveled the country touring with acts such as Lady Gaga, Blink 182, Weezer, Fall Out Boy and Gym Class Heroes.

“In addition to playing an instrument for the artists that I worked with, I always had multiple roles, whether producing, arranging, writing or contracting,” Oestreicher said. “Chester French was a very savvy band as they were one of the last bands to get a major record deal and the very first band on Facebook.”

Members of Chester French attended Harvard University with Mark Zuckerberg, Facebook’s CEO, which is how they connected with Facebook. The band would often have people like Zuckerberg, Sean Parker, an American entrepreneur, and other technology leaders in their social circle or on their tour bus.

“Taking part in and hearing conversations with these young visionaries showed me a different view of the world,” Oestreicher said. “These people had a desire to change the world, and they believed they could. I grew up thinking I needed to fit into a certain role, and I was meeting with people and making friends who had a totally different belief system. It introduced me to another level of opportunity.”

Following several years on the road touring, Oestreicher reconnected with his philosophical side. He spent time in India and eventually moved to Maui, HI, where he became personal assistant to Ram Dass, a spiritual leader and author of the popular book, Be Here Now.

In 2011, Oestreicher moved back to Connecticut and was hired as part of the music team for the Apollo Theater in New York City. His work at the Apollo led him to work on several television and Broadway productions as well as events like the landing of the Mars Rover and the Nobel Peace prize ceremony. He formed a production company that allowed him to offer all of his creative skills that he learned on these productions.

Living in different places around the world, touring and meeting people with different life experiences, helped Oestreicher transform into a global citizen.

“I want to bring the world to the Community Theatre and let people in the community experience things they might not otherwise get to see,” he said. “I want to create works that inspire and give young people a great experience.”

In a way, Oestreicher is merging his philosophical and artistic sides to help the community explore, learn and absorb more culture. “I want them to get a real experience of the arts, and we’re fortunate to have a world-class theatre where we can do just that.”