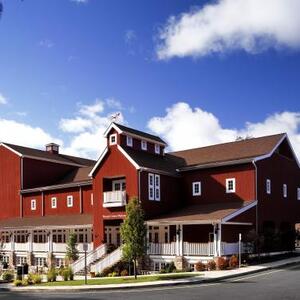 Westport, CT - Multi-award-winning Broadway star Renée Elise Goldsberry, perhaps best known for her role as Angelica Schuyler in the musical “Hamilton,” will headline Westport Country Playhouse’s 2022 Gala, “Back to the Playhouse!,” on Saturday evening, September 17. The evening will feature Goldsberry’s high-energy concert of Broadway, pop, and soul, backed by a seven-piece band, along with a pre-show cocktail party, live auction, and an after-party with a DJ and dancing—all while providing generous philanthropic support to the Playhouse.

Three-time Tony Award-nominated actor Robin de Jesús will serve as gala host. Barbara K. Streicker, former chair of the Playhouse board of trustees, will receive the Playhouse’s Leadership Award at the event.

Both Goldsberry and de Jesús reside in Connecticut.

“After three long years, we are so excited to finally return to our in-person benefit,” said Mark Lamos, Westport Country Playhouse artistic director. “It is sure to be a fabulous one! With two of my favorite performers—Renée Elise Goldsberry headlining and Robin de Jesús hosting—it will certainly be an unforgettable evening.”

Gala headliner Renée Elise Goldsberry is a multi-hyphenate actress and singer who has delivered award-winning performances both on Broadway and on the screen. She is perhaps best known for her role as Angelica Schuyler in the musical phenomenon “Hamilton,” which has become a cultural touchstone for the ages. Goldsberry’s performance earned her a Tony Award, Grammy Award, Drama Desk Award, and a Lucille Lortel Award. In July 2021, she was nominated for an Emmy Award for the Disney+ film adaptation. Goldsberry currently stars in Tina Fey’s new, Emmy-nominated series for Peacock, “GIRLS5EVA.” Up next, she will be seen in Billy Porter’s film directorial debut “What If.” As a solo artist, Goldsberry garners rave reviews performing to packed crowds in concert halls and symphony spaces all over the country. Her debut album will be released this year.

Honoree Barbara K. Streicker has been a beloved member of the Playhouse community for over 15 years. She is currently the chair emerita, after serving as board chair from 2014 - 2020. Dividing her time between New York and Westport, Streicker has distinguished herself with active participation in a number of arts, cultural, medical, and educational organizations, including the Brain and Behavior Research Foundation, Planned Parenthood of New York, Lupus Foundation, Milford Fine Arts Council Trust Fund, Advisory Board of Americans for UNFPA (United Nations Population Fund), and board of the Girl Scouts Council of Greater New York. In addition to her vast service, Streicker’s love of theater has led her to develop and co-produce several plays both on and off-Broadway. She holds an MBA from New York University and a BS from the University of Wisconsin. With her late husband John H. Streicker, chairman of Sentinel Real Estate Corporation, she is a proud mother and grandparent to four children and eight grandchildren.

The gala evening includes a cocktail party under a tent on the Playhouse campus, catered by Queen of Tarts Catering, with passed hors d’oeuvres, food stations, and cocktails, at 5:30p.m.; live auction of experiential packages, honoree presentation, and paddle raise in the theater at 7 p.m.; concert by Renée Elise Goldsberry at 8 p.m.; and after-party at 9 p.m., with DJ, dancing, desserts, and drinks. Dress is festive attire.

Westport Country Playhouse is a nonprofit 501(c)(3) corporation; contributions are tax-deductible, less the value of goods and services received, as provided by law.

Gala proceeds will benefit the non-profit, professional producing theater, now in its 92nd season - its work on stage, with schools, and throughout the community.

All artists, dates, and times are subject to change.  For updates on Covid-19 health and safety protocols at the Playhouse, visithttps://www.westportplayhouse.org/visit/covid19safety/

What:  Westport Country Playhouse 2022 Gala Fundraiser – Back to the Playhouse!

Gala Proceeds:  Benefitting the not-for-profit Westport Country Playhouse - its work on stage, with schools, and throughout the community

ABOUT WESTPORT COUNTRY PLAYHOUSE
The mission of Westport Country Playhouse is to enrich, enlighten, and engage the community through the power of professionally produced theater of the highest caliber and the welcoming experience of the Playhouse campus. The not-for-profit Playhouse provides this experience in multiple ways by offering live theater experiences of the highest quality, under the artistic direction of Mark Lamos; educational and community engagement events to further explore the work on stage; the New Works Initiative, a program dedicated to the discovery, development, and production of new live theatrical works; special performances and programs for students and teachers with extensive curriculum support material; Script in Hand play readings to deepen relationships with audiences and artists; the renowned Woodward Internship Program during the summer months for aspiring theater professionals; Family Festivities presentations to delight young and old alike and to promote reading through live theater; and the beautiful and historic Playhouse campus open for enjoyment and community events year-round.  Charity Navigator has recently awarded its top 4-star charity rating to the Playhouse in recognition of its strong financial health and commitment to accountability and transparency.