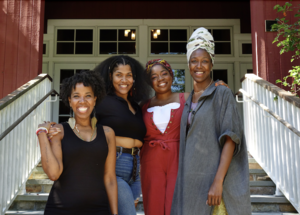 Westport, CT - Westport Country Playhouse will stage the gripping tale of determination, hope, motivation, and inspiration, “From the Mississippi Delta,” written by Endesha Ida Mae Holland, Ph.D., and directed by Goldie E. Patrick, from October 18 - 30. The play was nominated for a Pulitzer Prize and won a Los Angeles Drama-Logue Award.

“I have had a love affair with this play for many years and was truly blessed to get to know its creator Endesha Ida Mae Holland -- the woman who in fact lived it -- when I produced it at Hartford Stage years ago,” said Mark Lamos, Westport Country Playhouse artistic director. “She attended rehearsals and took great pride in the fact that it then moved on to a successful run Off-Broadway. We were so proud of the production and were so happy to welcome the audiences that were hungry to experience it. I'm thrilled that Goldie is going to be bringing her vision of it to the Playhouse as our season finale.”

Based on the author’s life, the triumphant journey begins in Greenwood, Mississippi--the Delta--where Phelia works in the cotton fields. Her coming-of-age experiences inspire her to dream, sweeping her into the momentum of the civil rights movement.

“Who we are and who we become is so beautifully tied to where we are from,” said Goldie E Patrick, director. “’From the Mississippi Delta’ is such a powerful journey of how three Black women step into themselves and their becoming as they experience the world around them.”

The three-member cast includes Claudia Logan as Woman 1. She is from Detroit, a graduate of SUNY Purchase, and now lives in Brooklyn. Credits include Westport Country Playhouse’s “Don Juan” (2019), Dallas Theater Center’s “Penny Candy,” HBO’s “Random Acts of Flyness” and “The Deuce,” and Netflix’s “Tales of the City.” Tameishia Peterson portrays Woman 2. Born in Dayton and raised in Memphis, she is a graduate of The Ohio State University, Michael Howard Studios, and Fiasco Conservatory. She now lives in New York. Credits include Starz’s ““Power Book II: Ghost,” Hulu’s “WuTang: An American Saga,” and Netflix’s "The Perfect Find." Erin Margaret Pettigrew plays Woman 3. She is a first generation Los Angeles native after having roots in Belize and the American South. Her artist-journey has been shaped with many communities and creators such as Manhattan Theatre Club, Page 73 Productions, JAG Productions, and more, while facilitating and learning alongside institutions such as UCSB, NYU, and CUNY.

Playwright Endesha Ida Mae Holland, Ph.D. (1944-2006) was born in Green­wood, Mississippi. During the 1940s and 1950s, Greenwood was an impoverished Delta community where Black people lived in fear of their lives. Raped by a white man on her 11th birthday, expelled from school, a prostitute at 12 and a mother at 15, Holland was headed in the wrong direction; that is, until the civil rights movement came to her town. She was swept into the momentum, participating in sit-ins, mass rallies, even going to jail with other activists, and her life was transformed. Holland earned her GED, and in 1966 she moved north to Minneapolis. Subsequently, Holland earned her bachelor’s and master’s degrees as well as a doctorate from the University of Minnesota in American studies, with a concentration in theatre arts (playwriting). The first of her plays, “The Second Doctor Lady,” won the Lorraine Hansberry Award for Best Play in 1981. She retired as pro­fessor emeritus from the University of Southern California, where she held joint appointments both in the School of Theatre and the program of the Study of Women and Men in Society (SWMS). Holland was forced into early retirement and a wheelchair by ataxia, a hereditary, neuromuscular disorder,

Directing “From the Mississippi Delta” is Goldie E. Patrick. She is a Detroit native and proud alumna of Howard University where she is currently a professor of hip-hop theater. Based in New York City, for over 20 years she has passionately worked in and built artistic collaborations in Black theater as a playwright, director, and producer. Her approach to theater-making lives at the intersection of her work as an artist, cultural worker, and educator. She is the former founding executive director of FRESHH Inc Theatre Company for Black womxn and girls. She is also a member of the Culture Caucus at the Kennedy Center and currently the inaugural Black Creation Playwright in residence at New Federal Theatre. Directing credits include “Project 892” (New York University–MFA program), “The Halal Brothers” (Columbia University), “Foriwa” (Hedgepig Ensemble & Classical Theatre of Harlem), “Paradise Blue” (Detroit Public Theatre), and “HERstory Love Forever, Hip Hop” (John F. Kennedy Center). Associate director credits include “Between the World and Me” (Apollo Theatre) and “By the Way, Meet Vera Stark” (Signature Theatre). www.goldiepatrick.com

The play is recommended for age 15 and up. Running time is approximately 90 minutes with one intermission. For the Playhouse’s 2022 season only, plays are consolidated to a two-week performance schedule instead of the usual three-week run.

Single tickets for “From the Mississippi Delta” start at $30 during preview performances (October 18 - 21), and beginning October 22 Opening Night, tickets start at $50 and are subject to change based upon availability. Buy early for best prices. For information on special offers, including discounts for students, senior citizens, educators, military and first responders, Indigenous peoples, professional playwrights, and groups, as well as options for pay-what-you-will and Westport, Norwalk, and Bridgeport Library passes visit www.westportplayhouse.org/visit/box-office/.

More info on “From the Mississippi Delta” here

All play titles, artists, dates, and times are subject to change.