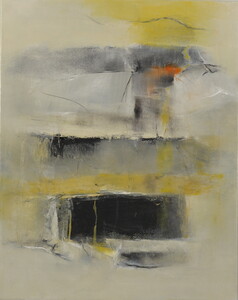 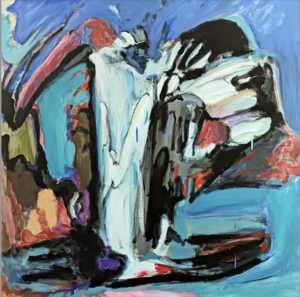 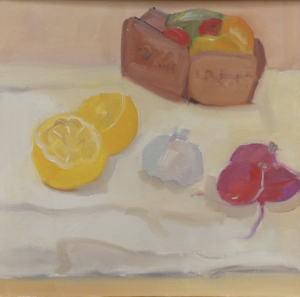 Bevi Bullwinkel attended many art workshops in California when she lived there and studied in CT at Silvermine. Her work has been in several solo shows in California and in Connecticut, and she has won  first place in several exhibits. She belongs to four art galleries where she has shown her work for several years.
After years of exploring photography, she says she is now “dedicated to painting and collage on canvas.” Her paintings express her “interest in nature, humanity, and love of art in its abstracted form.”
Mary Louise Long, a Stamford, Connecticut painter and printmaker, was born in Omaha, Nebraska. She was a lecturer in art and a curator at Bloomfield College in New Jersey and taught painting and printmaking at the Montclair Art Museum. She received a Painting Fellowship from the New Jersey State Council on the Arts.  Her biography is listed in Who’s Who in America, and Who’s Who of American Women.
Mary Louise has exhibited her paintings and prints in galleries and at many museums in the nation. Her work is in numerous private and public collections. She states, “Brilliant colors and powerful abstract forms are central to the work. Though not conceived directly from nature, references to the visible world are found in the paintings.  Ancient myths and legends also contribute to the content.The human condition is of utmost importance...I search for that subjective shape that stirs the viewer to bouts of recognition and denial.”

Judith Lambertson studied painting at the National Academy of Art in New York and had residency at Heliker- Lohoten in Cranberry Isles Maine.

She says, "I paint swiftly to capture the light and my immediate visual sensations. These oil studies are loose, free, and thinly painted. They possess a freshness and immediacy that only on site painting can hold. They are finished works in themselves and influence the studio paintings.   ​

In the studio I work on larger canvases in oil. The picture is eventually pared down to the broad areas of color, and simple forms with limited descriptive detail. The work becomes the meditation on the luminosity and hue of pigment, the fluidity and viscosity of paint. Resolving a painting takes many months of layering, deleting, adding. I am happy if in the end it looks free and easy."