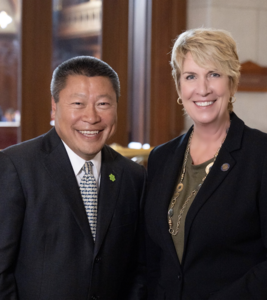 "I am so proud and thrilled to congratulate my dear friend, Laura Devlin, on her well-earned selection to join Bob Stefanowski to lead a more balanced, transparent and transformative future for Connecticut. From the first conversations with Laura as she weighed whether or not to run for the state house, I trusted and knew that she would be a principled, representative leader in state government.  Laura excels at communicating and articulating the needs and challenges of Connecticut residents and has a no-nonsense approach when it comes to policy making. Her leadership skills will be well utilized as she will now work to represent the entire state of Connecticut. She will be a tremendous compliment to Bob Stefanowski's legislative values and administrative experience as their campaign continues together. I wish her all the best and look forward to our continued working relationship as she moves into a new role as lieutenant governor and as president and presiding officer of the Connecticut State Senate after the November election."