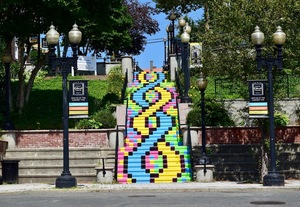 Bridgeport, CT - "Painted Stairway" is a community mural by artist Liz Squillace in partnership with the social action network Bridgeport Generation Now! The risers of the Broad St. steps have been painted color by color throughout the summer and are finally complete. The unveiling is set to happen on Thursday, September 7th from 5-6pm.

The iconic stairway starts where Broad St. meets Elm St. and leads up to the Downtown Cabaret Theatre. The Stairway has an unobstructed view from many vantage points along Broad St. and has now been revitalized by a harmonious design in a prime location for a public art piece. Seeing people climb and descend the stairs throughout the day has become a new joy!

The large scale mural could not have happened without the dedicated volunteers from BPT Generation Now, the local Bridgeport community and the cooperation of the City of Bridgeport. It was truly a collective experience of many painting sessions to transform the high profile landmark in downtown.

More than two dozen volunteers helped with the mural, from priming to laying out the design, taping to painting. Actual days spent painting (weather permitting!) were approximately 14 from late June to late August. Crews of painters averaged 5-6 per session. The mural design contains 6 colors. The colors were chosen to complement the surrounding environment referencing the height of the stairs reaching to the sky, the sun, the greenery of the landscape with flowers and also tying in the urban elements like handrails and lampposts of the stairway. The theme of the mural is a celebration of the people of Bridgeport, our diversity, and how through collaborating and working together we can achieve unity and prosperity.

Painted Stairway is made possible by a Regional Initiative (REGI) Grant, supported in part by the Cultural Alliance of Fairfield County in partnership with the CT Department of Economic & Community Development, CT Office of the Arts, and the National Endowment for the Arts. The grant has been generously matched by Spinnaker Real Estate and Trefz Corp.

Liz Squillace, who designed the mural and was awarded the Painted Stairway grant, is the owner of Paradox Ink, an art studio specializing in screenprinting, murals + public art. Paradox Ink’s mission is to make art more accessible by creating it in public places. Public art such as Liz Squillace’s mural at the Bridgeport Train Station as well as the many painted Utility Boxes that adorn streetscapes in Bridgeport and Stamford are seen by commuters on a daily basis. Paradox Ink has had a storefront located in the Arcade Mall in downtown Bridgeport for over 4 years. Liz was classically trained as an artist at Rhode Island School of Design and currently resides at Read’s ArtSpace live/work studios.

Liz had this to say about the new Painted Stairway mural, “It is such a fulfilling feeling to see this project come to fruition after months of planning, designing, meetings and preparation. It’s been an opportunity to connect with amazing people while transforming a piece of our urban environment. I think the Painted Stairway reflects what a fun and vibrant place Bridgeport is becoming to live in.”

Callie Heilmann, the president of BPT Generation Now, said, "When Liz presented the concept of “Painted Stairway” at one of our Member Meetings last year, everyone’s eyes and hearts lit up. Public art brings a unique joy and collective pride that is shared by all of us equally. We hope “Painted Stairway” empowers and inspires all people to be the change they wish to see in our city!”

Painted Stairway unveiling on Thursday, September 7 from 5-6pm is free & open to the public. To see photos of the mural in progress, visit www.paradoxink.tumblr.com