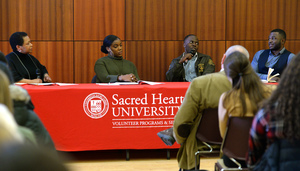 FAIRFIELD, Conn.—Sacred Heart University students, faculty and staff gathered in University Commons recently for a celebration of Martin Luther King, Jr., that focused on being aware, calling out injustices and creating change.

The event, “Celebration and Reflection: The Many Voices of Social Justice,”—which took place two days after what would have been King’s 89th birthday—was moderated by Karreem Mebane, director of Volunteer Programs and Service Learning, and featured songs, poems, an eye-opening panel discussion and a speech by keynote speaker Patricia Walker, dean of the College of Health Professions.

Walker, who wore a T-shirt with the words “stay woke” printed across the front, said she was a child in Chicago during the 1960s and remembers watching African-Americans’ protests on TV, when many of the nonviolent demonstrations turned violent. She saw the marchers get arrested, taunted and humiliated, she said.

“We’re dealing with some of the same issues 55 years later,” Walker told the audience. “For a long time, it felt like it was getting better, but it’s like all that hate went underground and now it’s spewing out of the earth like a geyser.”

Noting that King was in his 20s and 30s when he started calling for change, Walker said the chance for success in ending hate “rides on the shoulders of the young.” She encouraged those who want to fight for social justice to do several things. First, she said, “Stay aware of what’s going on, or stay woke.” Walker said young people should continue to use social media but, to complement SnapChat and WhatsApp, they should use a reliable source of information to stay in touch with current events. Secondly, she said, “Step outside of your echo chamber.” Walker said audience members should have conversations with people who look different or talk differently than they do. Lastly, Walker said find “your passion in social justice,” whether it’s environmental issues, voting rights, the economy or whatever else one finds important.

Walker ended her speech by reminding the audience to stay woke.

A panel of students and English Professor Anita August discussed King’s Letter from a Birmingham Jail. The group addressed their thoughts on the letter King wrote after his arrest in 1963 in response to clergy who did not believe in nonviolent protests to fight racism.

“The irony of the letter is that it was written from jail, a place where someone might feel dejected, but MLK felt empowered,” August said.

Panelist Tatenda Zenenga, a senior, said King’s statement in the letter, “Injustice anywhere is a threat to justice everywhere,” impressed him. Remaining quiet is not okay, Zenenga said. “When you see someone doing something wrong, if you stay quiet, it’s not going to stop. You have to be brave. You have to be able to say ‘that’s wrong.’”

Senior Wendy Estavien agreed that staying lukewarm on issues isn’t going to solve anything, and graduate student Christian Carter said when he was reading the letter, it was hard not to feel emotional. “Those are my people too. To be denied a privilege, it’s upsetting,” he said, referring to the treatment of black people during King’s time.

The panelists discussed their campus experiences at SHU, a predominately white university, and the situations in which they have found themselves. Zenenga said that, while he’s always had a diverse group of friends, he encouraged the audience not to judge people based on their skin color or gender. “People are open to having conversations; it’s about initiating it,” he said.